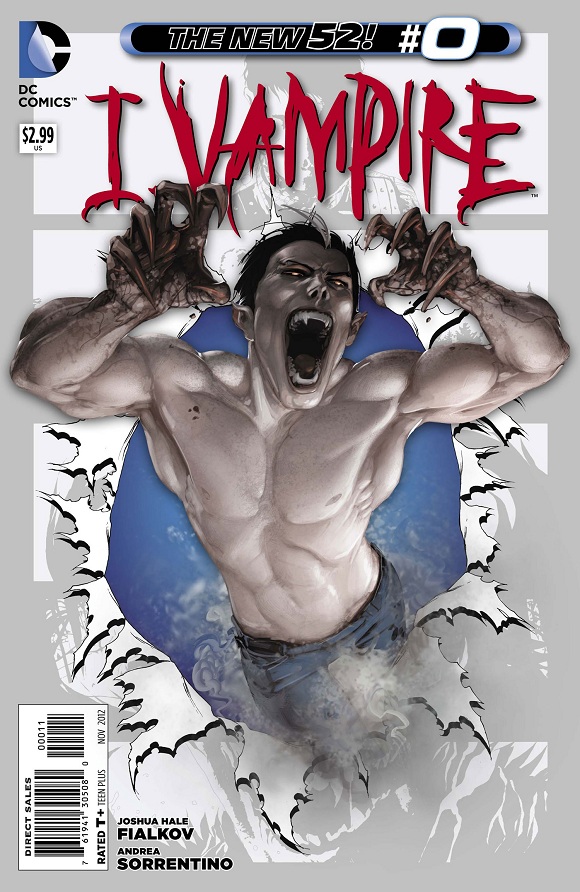 Mara has told you absolutely fantastic Batwoman #0 is. And Steve enlightened us to James Tynion’s great addition to the Batverse in Talon #0. While I agree with everything they say, I’m here to tell you that I, Vampire #0 is the best zero issue to date.

Josh Fialkov and Andrea Sorrentino are behind what is the most consistent book on the shelves not named Batman. Not to say that Batman eclipses I, Vampire, just that it equals the quality of Snyder’s critically acclaimed run. Every single issue is exceptional. I was late onto the bandwagon, but after I read the first issue I immediately went back and bought the rest. It is horror, sci-fi, comedy, romance, drama, and balls to the wall action. There isn’t more to ask of a comic.

While this book isn’t a completely new idea to the DC universe, it is new to many readers—myself included. This is one series that could actually benefit from a zero issue. Learning Andrew Bennet’s origin gives us an engaging story and makes the revelations of the last issue that much more meaningful. The story takes place in 1591, so it automatically avoids any conflict with continuity. While that fact isn’t vital to a story (I personally couldn’t be bothered with continuity errors) it also avoids the problems that some of the zero issues have caused.  Andrew is riding to the love of his life, fleeing the grasp of his father. He is a noble, whose star-crossed lover would not meet daddy’s expectations. In route Andrew’s buggy experiences technical difficulties, and changes his life forever.

From there we are regaled with the story of how he is turned. Andrew possesses qualities that we can all hope to have should we be confronted by pure evil. Knowing his death is imminent, he keeps his composure. This issue shows just how strong a character Andrew is, both in his resilience to stave off his attacker, and in his restraint to keep the one he loves safe. While we know how the latter turns out eventually, it is a venerable act nonetheless. What is more heartbreaking than giving up your one true love because you don’t want to harm her? I’ll tell you– as readers, we now know how Cain was locked away. We know how Andrew was able to do it, and that development makes the turn our hero took in I,Vampire #12 so much more tragic. This is the best zero issue DC has put out, not only because it is a fantastic story, but because it enhances the regular ongoing series. Kudos to Josh Fialkov, this is a must read.

I wasn’t planning on picking this issue up, but I was swayed by seeing one page, just one page, of Andrea Sorrentino’s work. It was so beautiful that I couldn’t pass it up. He has been one of few artists draw the entire run of their series in the New 52, and I couldn’t say that I would ever want anyone else on this book. His dark, gruesome work has been a huge draw of the book, and as well it should. His work is so detailed, so jaw dropping that you can’t help but want more. The layout of this book reminds you of J.H. Williams III’s work. It has a lot of two page spreads, and intricate page designs that connect events through one singular picture. Though it reminds you of Williams’ work, it stands completely alone at the same time. Few do what he is able to do, and those who try don’t do it as well. Then when you add the grimy, dark color pallet from Macelo Maiolo, it forms a stunning body of work. This team works off each other extremely well, and the finished product is ridiculously polished as a result.

I,Vampire is one of the best books that you could get on any given Wednesday. I am as big of an American Vampire fan as you can find, and I’m not sure I could pick between the two if a gun were to my head. Luckily, we don’t have to choose, and we get double the vampire fun on the second to last week of the month!