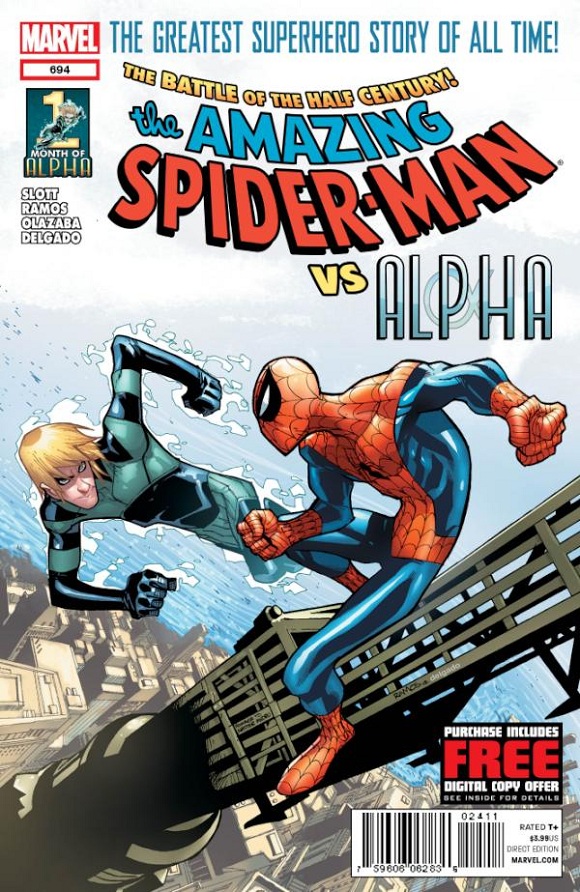 Amazing Spider-Man #694 is the end to the 50th anniversary arc, and I hate to say it, but you really wouldn’t have known unless you were told. This arc has had some good moments, but not really worthy of celebrating 50 years of the Web-head. Its main focus has been on Alpha, and how Peter deals with him. This issue does not deviate from said path. Alpha is growing more powerful by the day and Peter has lost almost all control of the situation.

During the issue New York falls under attack from a formidable threat, and the Avengers force Spidey to call on his protégé. From there things don’t go so well for Alpha. He shows just how irresponsible he is. He has all the power in the world, but he may just do more harm than good because he doesn’t know how to use it safely. During this sequence we get to see Spider-Man at his best. Whenever people he cares about are in trouble, Peter goes all out to ensure their safety. He is driven more than any other hero in comics to make sure that his loved ones aren’t harmed, and it is what makes him so special.

Humberto Ramos is a great match for Spider-Man. We find out in this issue, though, he is not so great for other Marvel heroes. Everything with Spidey and Alpha looks really good, but seeing Iron Man with a gigantic torso and tiny, chicken legs is really odd. I know that Peter is drawn that way, but he’s a scrawny dude. Iron Man is a suit of armor. You would think Tony would be so vein to proportion it correctly. It’s a small gripe in an otherwise well drawn book, but it really took me out of the mood. Also, having been spoiled by Dexter Soy, I don’t think I can appreciate Captain Marvel drawn by anyone else. One thing that I really love about Ramos is his ability to show emotion through the mask. That is a huge thing for a hero that, when in costume, never has any of his face visible. He carries the expression through the eyes of the mask and Peter’s body language so well, that it completely makes up for the lack of human features visible to the reader. Also, this cover is fantastic. It’s a tribute to The Amazing Spider-Man vs. Superman from 1976, and it is pretty funny. Little nods like this are fun to come across in comics. It’s like watching an episode of Community and actually knowing what show or movie they’re parodying that week. 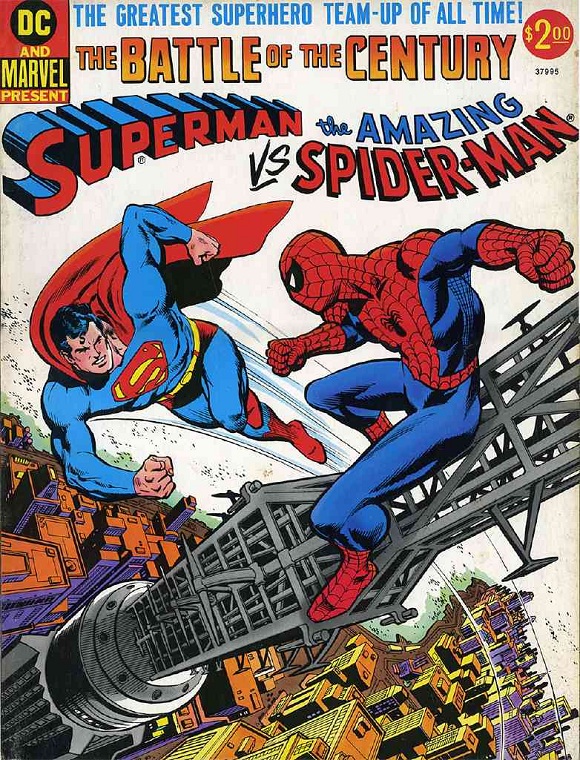 Dan Slott’s run on Amazing Spider-Man seems to be split into two parts. There is the first part which ends after Spider Island, and I enjoyed it quite a bit. Then there is everything after. It isn’t that I don’t like what Slott has been doing, it just isn’t as good. There are a lot of threads that need to be tied off, and I’m wondering if things are getting too big. Sometimes stories lose focus if the scope grows too large to keep things tidy and flowing well. I fear that Slott’s grand plans may be hurting the quality of individual issues.

It’s a good book. It isn’t great by any stretch of the term, but it continues to be solid. I wish Spider-Man would have been more of a focus for his 50th anniversary arc, but that is a personal complaint. Slott and Ramos are building toward huge things in issue 700, and it will be interesting to see just what is in store in the coming issues.