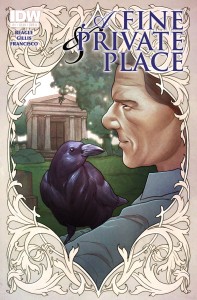 Let me preface this review of A Fine & Private Place by saying I have not read Peter S. Beagle’s original 1960 fantasy novel nor have I seen the Peter-S-Beagle-BANNED musical version of the story. I’m coming to this story of ghosts, life and death, love, talking ravens, and mausoleum-squatters with fresh eyes.

And I love it. Peter Gillis and Eduardo Francisco put together a wonderful first issue in this Peter-S-Beagle-AUTHORIZED adaptation of A Fine & Private Place. The story is fascinating and the artwork is absolutely stunning.

The story follows the aforementioned mausoleum-squatter, Jonathan Rebeck, and his whimsical adventures: talking to the ghosts of the newly deceased, receiving food and company from a raven (to whom he can also talk), and chatting up (romantically?) with a new widow. All in the first issue. There is some mysterious intrigue surrounding Rebeck’s new ghost-friend and the means of his murder, but Gillis wisely saves the nit and grit of it all for next issue, instead focusing on Rebeck and the widow, Mrs. Klapper. It grounds the story in the human dilemma of company and isolation, allowing for the fantastic elements of talking ravens and ghosts and murder plots to settle on the periphery. I imagine that those elements will come into play much more in future issues, but for #1, it’s a perfect blend.

Eduardo Francisco’s artwork takes the best elements from Howard “Comics Legend” Chaykin’s naturalistic, round character designs, and the contemporary, solid feel of Morning Glories’ artists Joe Eisma, Rodin Esquejo, and Sonia Oback, and mashes them all up into a wonderful, romantic, haunting style perfectly suited to Gillis’ (and Beagle’s) tale. There are a couple of full-page spreads that recount Mrs. Klapper and Michael Morgan’s tragic tale that feature innovative paneling and energy that counter and balance Gillis’ heavy exposition. It’s brilliant. Priscilla Tramontano washes the entire book in vivid color, evocative of the autumn setting and somber mood.

Fans of Beagle’s original novel should probably check this one out just for continuity’s sake, but comics readers looking for something with more subtle fantasy and/or more traditional literary elements might want to check A Fine & Private Place out! The artwork is stunning, and the story promises mystery, romance, and more ghosts in the coming months!