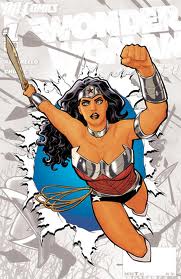 If you don’t know already, I’m a Wonder Woman fan. I’ve been reading this series since it began and so of course I was going to read the origin story.

The story that readers get to read is one that originally appeared in “All-Girl Adventure Tales For Men #41”  and is one that introduces us to Wonder Woman in in her teenage years. She’s not accepted by her fellow Amazons as she came into the world as a baby formed out of clay (this is way before she learns of her true origins). She feels somewhat out of place.

That all changes when she meets the god of war Ares. He takes Diana under his wing and trains her to be the best warrior that she can be.  Eventually all of this training leads to one final test and it’s one that will also test Diana and Ares’ relationship.

I found this origin story to be great. I think it’s a great way to introduce new readers to Wonder Woman and get them interested in keeping up with the series. The writing was excellent and the art was wonderful.

It’s a buy for me. Like I said earlier, this is an origin story that will get new readers curious about the character.  Though I have a few issues with a few things that have been revealed in the series (Amazons raping and murdering), overall it’s one of the new 52’s best books and readers will enjoy it.