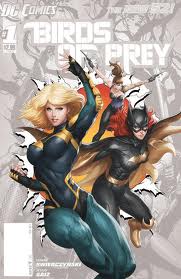 The origins of how the team came into existence is revealed within this zero issue.  Readers already know how Katanna and Poison Ivy joined the team, this story focuses on Black Canary’s first meeting with Starling and Batgirl.

A year ago, Dinah first meets Starling after joining the Penguin’s gang under false premises.  The two team up and go after something that their boss wants, which is what Canary also is searching for. But before her takedown can begin, Batgirl crashes the party which will undermine Canary’s secret mission.  A fight ensues, and then a truce and that’s when the idea of a team pops into Canary’s head. Meanwhile,  Starling has secrets of her own…

Birds of Prey is a favorite New 52 book of mine. The writing and artwork is right on target. This issue told the origin story well, although I’m left with questions about Canary’s past as well as Starling’s. Starling has become a favorite character of mine and I look forward to more revelations about her.

Buy it. It’s an excellent series, and if for some reason, you’ve been following this series and thought maybe you stop, this issue gives you reasons to stay with the book.