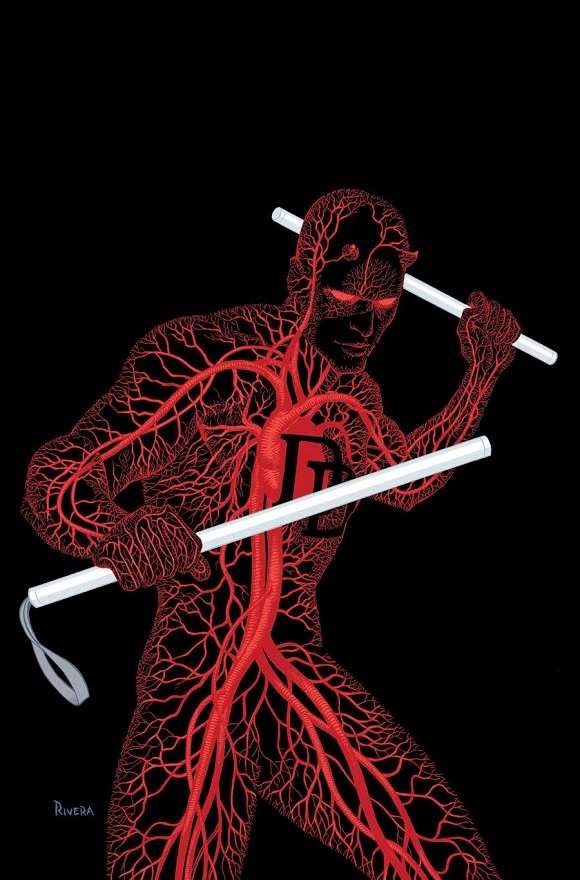 The dream team is back! Chris Samnee makes his return to Daredevil, and Mark Waid continues to pen story that will make it everyone’s “Top 10 Daredevil Run’s” list in the future. What Waid is doing is twisted for both Matt Murdock and for the reader. We have bought in whole heartedly to Waid’s let Daredevil win concept, and now he’s messing with our heads.

Things pick up with Foggy and Matt still at odds. Their relationship is in shambles quite frankly, and it pains me to see it. It’s like if Gonzo and Rizzo were to part ways. I- I don’t even want to think about that. Each going about their own business, Matt and Foggy are both heading into some deep water. Foggy is probably taking on more than he can chew, and we saw in the previous issue how that worked out for him. On the other hand, somebody is messing with Daredevil hardcore. We still don’t know who, but it’s dark and sick nonetheless.

The book is fairly light on action, but it’s not a bad thing at all. The story Waid is building is phenomenal. It’s gripping, and I have no clue where we are headed. It’s a perfect mix of street level sleuthing, and emotional punches to the gut. Even when there are bullets flying around, Waid is able to make things more than they appear and continue to add depth to the story.

I honestly can’t get enough of Chris Samnee’s work.  He’s opened me up to a style of art that I never would have thought I would have an affinity for. His bold lines, old-school style, and simplicity are just gorgeous. Though simplicity can be viewed negatively, I can assure you there is nothing else needed on his pages. He is able to convey exactly what the story calls for, there just isn’t a bunch of clutter around it—which is great because it keeps your eyes focused on what needs to be seen rather than get lost in all the different things going on in a panel. His style may be very different, but the quality of work he produces is up there with the best of the industry.

Every month you hear about Daredevil on the podcast. Every issue has had a positive review. Guess what? Mark Waid and Chris Samnee don’t look to be letting up any time soon. This is a must buy, and may just be the best super hero book on the shelves.