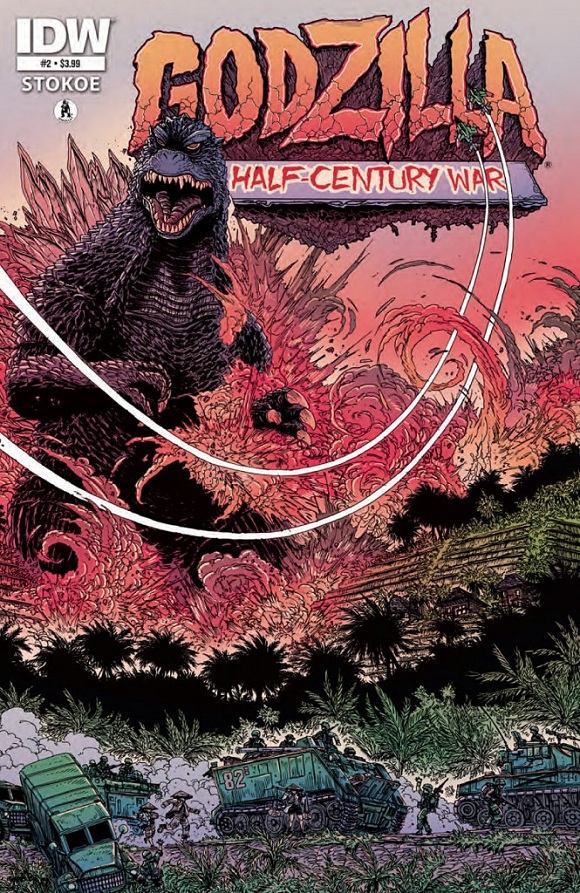 Godzilla: The Half Century War #2 Review

Written and Drawn by: James Stokoe

I won’t regale you with tales of my VCR breaking from watching Godzilla movies when I was a kid this time, but I will tell you that I am overjoyed to have a Godzilla book that brings back my child-like enthusiasm for a the big guy that I haven’t felt in over a decade. The first issue of The Half Century War was so good, I really didn’t know what to expect from there. I didn’t know if things would continue to be great. I didn’t know if James Stokoe could keep up his ridiculously detailed pages. I didn’t know if the nostalgia would wear off in between issues. Each of my lingering concerns was put to rest as I finished the second chapter: Yes it’s still great. Yes he can. And no, I’m still giddy to see a giant lizard rampage through anything in his path.

Let me get this out of the way now—James Stokoe draws one beautiful book. The detail and sheer amount of things he fits into a panel is crazy, and it’s not the slightest bit too crowded or busy. It’s astonishing that every panel is so meticulously done, and done so within the time constraints of a book that ships monthly. Stokoe isn’t alone in bringing this book to life, and Heather Breckel deserves recognition as well. Her color scheme fits things just perfectly. Though flames aren’t visible at all times, her work with the colors leave no doubt that everything around our characters is burning. It gives such a fantastic look to the book, and at times it reminds you how utterly dismal the situation surrounding our characters is.

Though the art is what will sweep you off your feet, the story is what will keep you in the giant irradiated lizard’s arms as you delve into the deepest love of monster movie greatness that we have in comics today. Ota has been chasing Godzilla around for over ten years, and his company feels as if they are making progress in understanding the beast. As the script usually goes in such cases, he starts doing new things and throws everybody for a loop. So, the AMF busts out some of the futuristic weaponry that Godzilla nerds will know all too well, and see if they can’t put a few dents in the King of the Monster’s hide. Just when you think this book would be strictly a human’s perspective on trying to stop a force of nature, we get introduced to new wrinkles to their task. And I can’t wait to see how Stokoe manages giant, monster brawls and the human element in tandem. It’s too easy a trap to fall into making this a Gozilla versus (insert monster name here) book, but what is so endearing about this is the attachment you have to Ota and his men. I’m not worried—James seems to have a handle on what he is doing, and I’m so excited for the next issue.

Buy it. This is everything you could want out of a comic: great story, great characters, jaw dropping art, and a 200 foot tall, radiation breathing lizard. What more could you want?

One thought on “Godzilla: The Half Century War #2 Review”