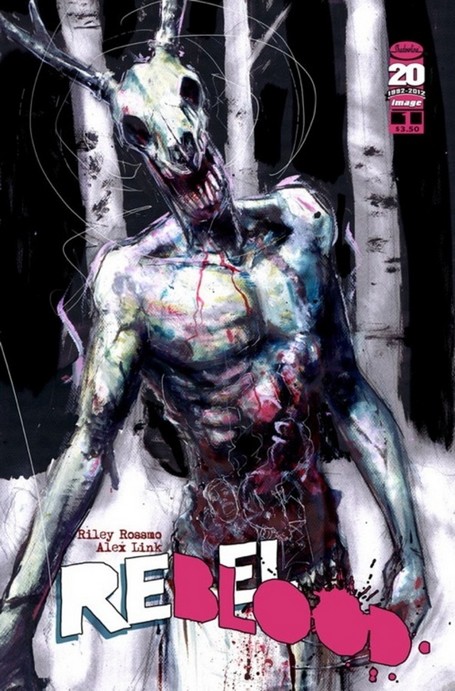 Oh, how I love zombie stories. And Riley Rossmo’s art style. Rebel Blood was right up my alley, and I think many people will agree. This is a TP that collects all four issues of the mini series plus lots of bonus materials including concept art, early covers and a collection of Rossmo’s fantastic zombie wildlife creations.

Rebel Blood is incredibly gory and blood soaked. There is no holding back on the violence here, whether it be human on human, zombie on human or animal on human. One of the best zombie attack scenes I’ve ever seen, in book or movie, plays out here with an undead pregnant woman throwing herself at a moving vehicle, causing the vehicle to wreck and unleashing her equally undead baby on the accident survivor. This book is pure, unadulterated zombie fun party extravaganza.

There is a real story here, which is two fold. The first is the zombie outbreak. Second is the story of Chuck, a damaged and depressed firefighter who can’t admit to himself or his family just how bad things are in his head. He’s sent to guard a secluded fire tower in the hopes that some time alone will help him gather his fragmented thoughts and return a more grounded man. Plagued by flashbacks of his failures at home and daydreaming about possible scenarios in which he plays out very different roles in his return to his family, Chuck’s mental pieces seem to shatter into smaller bits rather than ‘collecting’.

If there is one critique I felt about this book it’s that the ongoing flashbacks and daydreams were confusing to me on the first read. I wasn’t sure exactly what was really happening, which by the end of the story I realized was part of the point. After a second read, I could clearly separate past, present and possible future. Happily, I enjoyed the book enough to go back and read it again, immediately, so this is by far not a negative, but perhaps more just a footnote.

Verdict: Rebel Blood is an excellent, unique story of zombie outbreak meets Memento style psychological break down. Add the scratchy, color drenched, top shelf art work of Riley Rossmo and you’ve got a really awesome trade. Buy this one, you won’t regret it. It’s fun enough to read multiple times and carries a Romero-esque level of blood and guts that every zombie fan would appreciate.