As we inch ever so close to the launch of Marvel Now, more and more books seem to be getting announced with two of the mysterious and cryptic one-word teasers (“Wanted” and “Killers”) finally being outed as “Cable and the X-Force” and “Uncanny X-Force.” 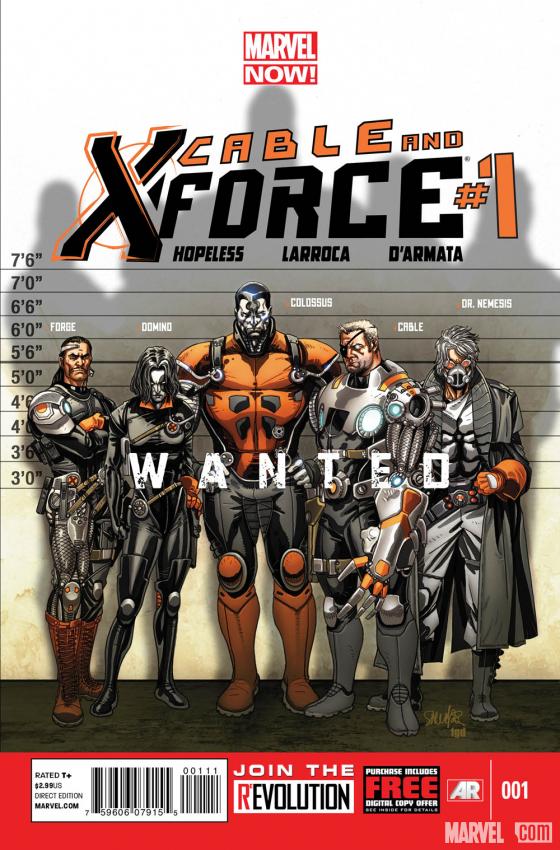 Cable and the X-Force is written by Dennis Hopeless and features art from the team of  Salvador Larroca and Frank D’Armata. With the tagline “Wanted,” Hopeless explained that the first arc will be focused on the team of Cable, Domino, Forge, Colossus and Dr. Nemesis on the run from Havok, Cable’s uncle.

“Our first arc is the story of how Cable and his X-Force become the world’s Most Wanted mutant terrorists. You know how at the beginning and end of every “Mission Impossible” movie Tom Cruise is a spy, but in the middle he’s an international criminal on the run from the whole world? That’s what we’re doing here. How hard is it to save the world when you’re also on the run from the law?”

Hopeless has a real love of Cable, calling him a “Mad Max meets Steve McQueen as played by the T2 Terminator,” and hopes that people will really enjoy the series.

“Conceptually, it’s pretty different from anything I’ve done before. But there are some characters in the book — and character relationships — that feel pretty familiar to me. It’s also sort of inspired by the same stuff I drew from for my very first published book, “GearHead.” I think they’d both be shelved in the same section of the video store, if that makes any sense.”

Cable and the X-Force will be released in December.

Next is Uncanny X-Force written by Sam Humphries with art by Ron Garney. Featuring the unique team of Psylocke, Storm, Puck and Spiral, Humphries plans on staying true to the highly praised Rick Remender while bringing his own unique ideas to the table.

“One of my favorite things about this book, not just working on it but reading it over the years, is that it delivers a story that you can’t find in any other X-Book. Theres’s a combination of characters and character dynamics, and they go out and find and deal with situations and beings and all sorts of dark secrets that you can’t find anywhere else. Through the different incarnations, we’ve seen that implemented in different ways. You have the Rob Liefeld paramilitary extreme version, you have the wacked-out, nearly psychedelic Milligan/Allred version, you’ve got Rick Remender doing his thing with questions of killing and murder and when it’s okay and when it isn’t.

Even though it’s a definition, it gives you a lot of room to move within that definition. There’s a lot of different things that you can pick apart in the Marvel Universe, and specifically the mutant universe, that aren’t ever really addressed in the main book. It’s a huge opportunity to do some cool things, new things, to get people excited and present the whole mutant world in a new light.”
.
Uncanny X-Force, under Humphries run, isn’t planning on sticking around one place for very long. “What we’re going to do is cut this crew loose and let them roam around the world to various locations. Some are real-life locations, some are Marvel Universe, some may not even be on Planet Earth.” Humphries also has already planned Bishop to be the first major villain they face right out of the gate.  “He was abandoned in the year 6300 AD. The dude has been alone, thousands of years in the future. A man goes through a lot of changes trying to get from 6300 AD to the present day. It is going to be an ugly reunion all around.”

He hopes though that new and old fans alike will find something to enjoy with the new Uncanny X-Force. “Long-term X-Men fans will definitely find juicy bits to sink their teeth into. Familiar characters, familiar locations, familiar themes. But my job is to take these into the context of X-Force and present them in a whole new light. To see a new, perhaps dark corner of locations you’ve seen before.”

Uncanny X-Force will be released in January. To avoid confusion between the two books, Humphries had this to add in an interview with Marvel.com: