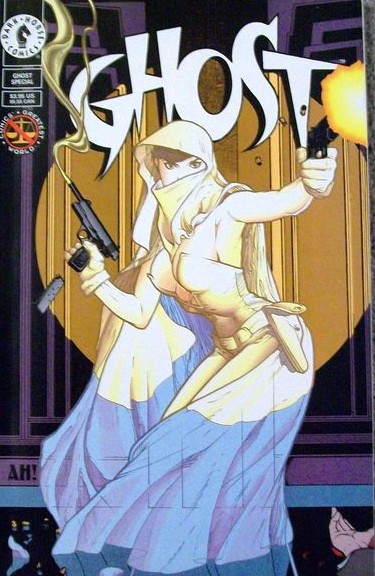 A series overview by Bob Reyer

This week’s release of Dark Horse’s Ghost #0 by Kelly Sue DeConnick and Phil Noto will reprint the recent stories from Dark Horse Presents, and serve as the re-introduction into the broader marketplace of the character of “Ghost”, the first stories under her own title since 2001. With the quality of Ms. DeConnick’s work on Captain Marvel as an indicator, we will be witness to a re-vitalization of the traits that made Elisa Cameron and her story so compelling, and which positioned Ghost as the stand-out book in the 1993 launch of Dark Horse’s “Comics’ Greatest World” shared universe of titles.

Briefly, Arcadia City news reporter Elisa Cameron, murdered while investigating a story, is resurrected as the avenging Ghost, with the power to walk through solid objects, and the capability of teleporting herself through space, although this latter comes with the horrific problem of passing through Hell with each “jump”. Using these abilities, and brandishing her blazing twin .45 caliber automatics, she walks the night, searching first for her own identity, and then on a quest to find her killer. After the subsequent slaughter of her parents, and the disappearance of her sister Margo (a nod, no doubt to The Shadow’s friend and companion, Margo Lane), Ghost begins a hunt for the persons responsible, but instead of a straight-ahead murder mystery, she finds that Arcadia is a hot-bed of arcane and mystical activity, which leads to confrontations with all manner of underworld demons and goblins, as well as an understanding of  Arcadia’s (and Elisa’s) place in the world.

As related by creator Eric Luke, the stories were told in  a film-noir style with much internal monologue, befitting the “Shadow”-like persona and abilities of the lead character, and as in those films, the layers of information are revealed as parts to a puzzle that don’t quite fit together, leaving you with a sense of uneasiness and dis-quiet. Each issue would bring new revelations about Elisa’s predicament and history, as well as new obstacles to overcome, all leading to a new role for Ghost in the arc-concluding issue #25. 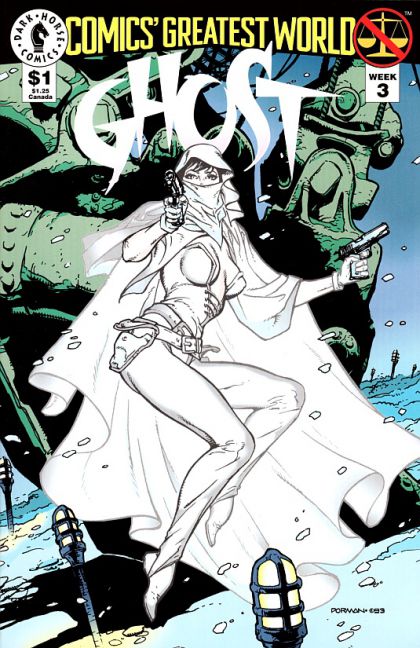 Art chores were handled by a large group of creators that included Ivan Reis, Terry Dodson, and John Cassady, but the series began in Comics’ Greatest World #3 with  gorgeous pencils by the inimitable Adam Hughes, who would go on to do the interiors of the first three issues, and the covers for issues #5-7. Mr. Hughes’ “pin-up” style, coupled with Ghost’s revealing outfit, garnered much initial attention, but led many to believe that this was just another of the “Bad Girl” books that were much the rage then, which sadly in some quarters distracted audiences from the deep emotionalism of the stories themselves, and Elisa’s journey of discovery. Interestingly, the reason Elisa gives for wearing the costume she does is to put men ill at ease, giving her an advantage in a tight spot, which worked quite well in the books, but perhaps worked against it in comics stores with readers unwilling to look past the cheesecake. As listeners/readers of “Talking Comics” know, I am the first to decry the objectification of female characters, so trust me when I say that Ghost (aka Elisa Cameron) is a fabulously rich character, and the raw emotions that threaten to overwhelm her as she alternately doles out justice and searches out the missing pieces of her past life, are stunning in their complexity, and are often very moving.

Mr. Luke would tell his “Ghost” stories for the thirty-six issues of the book’s initial series, and they are all marvelous. The follow-up 1998 series, by writers Chris Warner and Mike Kennedy is good as well, and would take Elisa to some new places emotionally, but seemed to me a bit conventional, as opposed to the cinematic approach of Mr. Luke.

With the talented Ms. DeConnick at the helm, I’m certain that this new incarnation of Ghost will be a deeply personal and emotional work, and a re-invigoration of a great character that’s been too long wrongly relegated to the sidelines as a failed example of “Bad Girl Comics”, an opinion obviously shared by Ms. DeConnick, whose work on Captain Marvel has propelled that previously under-realized super-heroine to a position of strength and leadership in the Marvel universe. I’ll check back in with a review of Ghost #0 next week…so stay tuned!

VERDICT: If you’re a fan of books such as Birds of Prey, pulp heroes such as The Spider or The Shadow, or on the more supernatural side of things, Hellboy, you’ll find a lot to hold your interest, as Ghost embraces aspects of all those previously mentioned series. Don’t take my word for it, though—I’m sure you can find a copy of the initial TPB collection Ghost Stories fairly cheaply, and after reading, I think you’ll be as haunted as I was all those years ago by the character of Elisa Cameron.

Ghost Stories (1995) TPB collection of the first appearances of Ghost

Ghost: Omnibus #3  Due in January from Dark Horse!

ADDENDUM: There were “Ghost team-ups”, also: