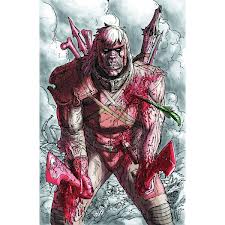 Story by:  Brandon Graham with Giannis Milonogiannis and Simon Roy

The journey of the old man Prophet and his companions continue in this latest issue.  As they travel towards Earth, Prophet, Hiyonhoiagn, and Deadman make stops along the way to recover pieces of Deadman’s body, while fighting and trying to free slaves of the Empire.

The story begins with Prophet awaking and meditating. He can see the many other Prophets who’ve also awaken in order to start their own journeys of fighting the Empire on their own alien worlds.  After having breakfast, the recovered body parts of Deadman leads the ship to a moon of Jupiter where Prophet and Hiyonhoiagn deal with the enslaved population while they recover the last remaining pieces of Deadman’s body as an ancient weapon that was contained by the local population begins to awaken…

Before reading this issue, I wasn’t familiar with the character Prophet, but after reading, I have a sense of who he is and what’s he is about. I found the book to be well-written. I felt as if I was reading a novel and not a comic book.  I liked how the story has mixed ancient with new technology.  I found the art to be good and descriptive and liked how the illustrations also mixed the ancient with futuristic concepts.

Buy it if you’ve been reading the series and if you want to jump in and pick it up you should buy it too but I would recommend buying earlier issues if you want to have a better understanding of the story.