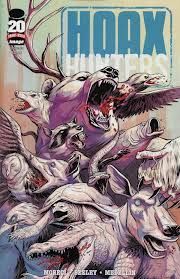 The mystery continues as the Hoax Hunters deal with an enemy and his allies in this third issue. The story begins with our supernatural scientific crew surrounded by wannabe ghost riders and a monster who looks as if someone took crossbreeding animals to a whole unholy level.  Ken and Regan take on the fire heads while Jack decides to deal with monster himself.  The fights are brought to an abrupt end as Clive disappears with the monster in thin air leaving his voodoo friend in the dust.

After looking for clues in Jack’s mind and interrogating the voodoo man, the have a little more insight into what’s going on concerning the mysterious whereabouts and happenings of Clive, and Jacks’s father.  The comic ends with the team realizing that their friend is in danger and indeed he is as Clive has just captured him.

I thought this issue was good and I enjoyed the art. I haven’t gotten a chance to read issue two so there are a couple of things that I’m missing information wise. For instance how did the Sheriff’s face get messed up and when did Ken and Murder arrive? I liked the humor in which Ken dealt with the wannabe ghost riders as well.

This is a buy for me and I can’t wait to see where this series is headed as it’s an interesting and fun read.