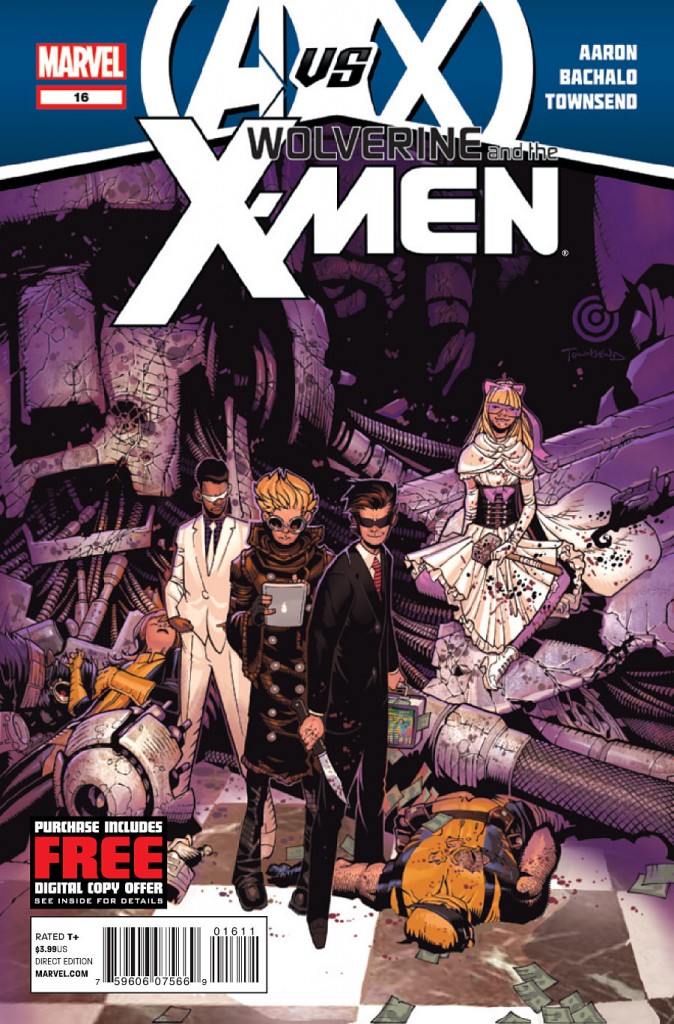 Wolverine and the X-Men #16

Pencils and Art by Chris Bachalo

Meet Kade Kilgore. Multi-billionaire. Brat. Psychopathic killer, and current leader of The Hellfire Club. Soured by the last time they’d tangled with the students and faculty in the Jean Grey School for Higher Learning (Issues #1-3), The Hellfire Club has been rather busy. You see, while every last X-Man and Avenger has been off having a apocalyptic skirmish The Hellfire Club has been developing an entirely new designs of Sentinel. Nano-Sentinels, Sentinel Tanks, and even Tri-Sentinels, for when nothing less than genocide will do! The time has come for Kade Kilgore to sell his Sentinels to the highest bidder on the blackest of criminal markets. Only the Phoenix Five have gotten word of his dealings and don’t very much care for antics of Kade and his friends. It’s time for The Hellfire Club to have a time out. In jail.

Have I ever told you how wonderful a job I think Jason Aaron and Chris Bachalo are doing with Wolverine and the X-Men? Well, the writing in this issue is stellar as we switch gears about half way through and instead begin to focus on the origin story of Kade and his journey to the clubs maniacal leader. The picture of a sadistic, mad youngster is perfectly painted by the words of Jason Aaron. I now know all about Kade Kilgore and I absolutely fell in love with him in this issue.

I’m a big fan of the younger generations that inhabit the Marvel Universe. There is something so twisted about how some of the worst villains you could be targeted by aren’t even old enough to drive the X-Wing yet. You think to yourself, “Ha! He’s just a little kid. I could take him.” But you can’t. They’re too clever and you will almost always end up undermining their capabilities in battle. Kids also make for the best liars. They are not to be trusted and those who do end up falling for their lies usually wind up dead or eating out of the palm of their soft hands. The Hellfire Club and the storied events inside of Wolverine and the X-Men #16 are a prime example of why groups of these types of children can be so dangerous. And also, such a damn good read.

Ah yes, there simply is no way of escaping the mention of the books art team. Chris Bachalo is quickly growing to be one of my favorite artists working at Marvel Comics. His highly detailed and highly expressive characters and line work blend seamlessly with inkers Tim Townsend, Jaime Mendoza and Al Vey. For several pages the warm colors of yellow, orange and red make it appear as if everything is burning. It’s quite fitting seeing as you’re reading a comic featuring The Hellfire Club, don’t you think? Later, the book is cooled off with some great gray scale coloring as we delve into Kade’s past. It’s a very pleasing presentation and I absolutely love it.

VERDICT: Wolverine and the X-Men is my favorite X-book on the shelves today. I can’t recommend it enough. If you want a vibrant, funny, and entertaining X-Men book than this is your comic.

* This review was written while listening to the album Lonerism by the band Tame Impala.