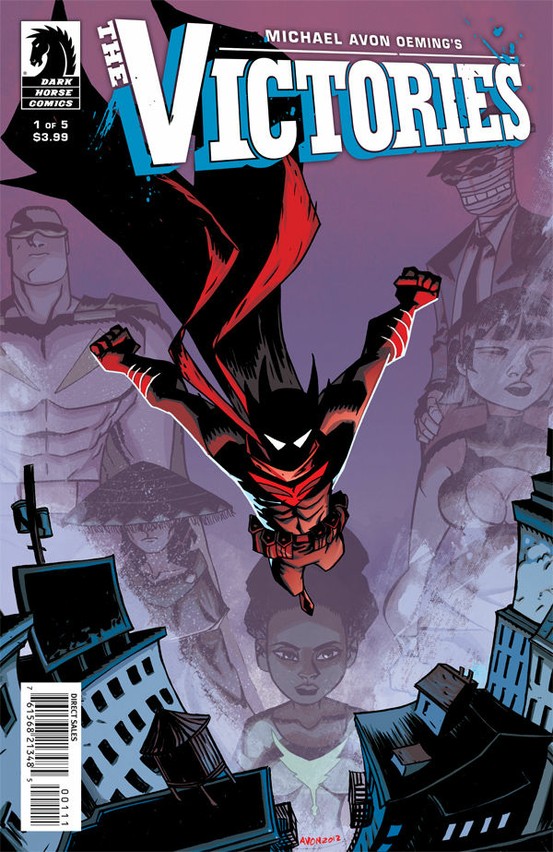 Curiosity won out today at the comic shop and I’d decided to pick up Michael Avon Oeming’s The Victories #1. Unfortunately, this is a time where perhaps doing a little bit of research rather than committing to a “blind buy” would have proven beneficial. Because not only did I not care for the book but in a way I’m also sort of embarrassed for it. I know that this sounds harsh but allow me to explain.

I didn’t know what I was in for. So part of the disappointment in the book is my own fault for not having done any research on it prior to my purchase. However, with that said, sometimes blindly bought books turn out to be diamonds in the rough and you’re all the happier for having taken the chance on something new and different. Only I found the writing of The Victories #1 to be rather unclear at times. I’m not certain that I fully understood the metaphors that were being spoken or the puns that were supposed to be good but were so obviously still very bad. This issues title character, Faustus, feels like a corny amalgamation of Deadpool wearing a Robo-Batman-like costume. He’s dark, he quips (badly), and he’s just not anyone that I can relate to on any level which is unfortunate.

To the books credit I did enjoy the art to a fair degree. Though panels during the fight scenes felt a bit stiff the angular but crude line work lent a rather cool aesthetic to the pages while the coloring by Nick Filardi right on point. But alas, problems arose for me almost immediately with the book and rather than have my doubts abated by later events I found that the more I read the more I was insulted by what I was reading. Not only does the dialogue consist of a fair amount of ineffectual profanity that lends nothing to the characters personalities, but at one point I actually had to view a panel in which a half man half jackal, after promising to rip off the head of his latest victim and sh*t down his neck, did just that. If you look close you can see the silhouetted link of last nights Chinese food making its way into the gaping wound. Yes.

I should probably tell you a little bit about what the deal is with this book. A drug called The Float has been making its deadly rounds inside of a city that’s already gone to the dogs. Ravaged by crime and half man half jackals (apparently), Faustus fights alongside the other members of The Victories, to help keep a decaying city from collapsing in on itself. So far I have not met any other members of The Victories team and I’m still not quite sure of what The Float is capable of doing to its victims. With only five issues planned I find it curious that this one decided not to cover more ground. But, that’s not for me to know just yet. I’m sure that Michael Avon Oeming has a plan and that it’s going to take more than one issue to get things rolling. I just don’t know that I’m going to be there to find out what that plan is.

VERDICT: Pass. By all means, find a way to read the book and by your own judge, but if I told you to buy this comic I wouldn’t be able to sleep at night. I know that there is an audience for this book somewhere but it’s just not happening for me.

* This review was written while listening to the album Ghost Reveries by the band Opeth.