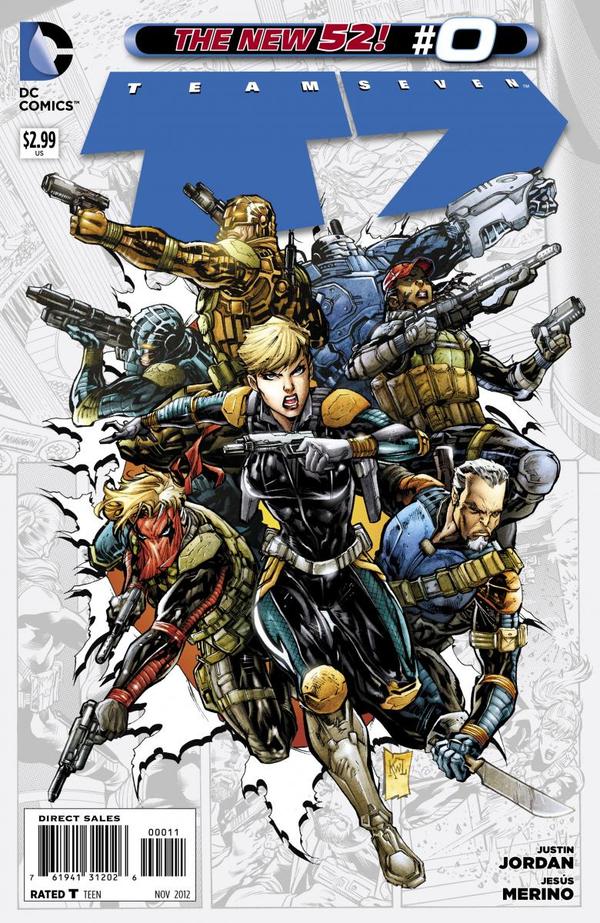 Out of the four comics debuting this month for DC, Team 7 was definitely without a doubt my most anticipated. Not only did you have Justin Jordan (Strange Talent of Luther Strode), teaming up with industry veteran Jesus Merino (JSA), but you also had a book that featured a who’s who of action heroes in the DCU. Whether it’s Grifter, Deathstroke, Amanda Waller or Black Canary, there’s someone here for every fan. Add in a dash of espionage with a whole lot of explosions and you have a flawed, but otherwise solid book.

The story takes place five years in the past, when superheroes are just starting to appear on Earth. Fearing the immanent increase in metahumans that is bound to take place over the coming years, the government created “The Majestic Project,” a means in which they could find, assess and possibly control these metahumans. One of the ways this project can work is with the creation of Team 7: a group of highly trained individuals from different backgrounds and walks of life dedicated to stopping the metahuman threat.

Issue #0 focuses on introducing us to these characters, what they bring to the table and how they came to be a part of the team. While it’s a standard set-up, and one we’ve certainly seen many times before, the book has a solid pace and gives each character a moment to shine. My hope is that these characters will be fleshed out in the future, but for right now, and for the context of the issue, it’s certainly more than enough to satisfy most.

In terms of art the book is solid, if not entirely memorable. There really are no major flaws, it just feels a little flat at times. They have big set pieces and backgrounds that are fantastic to look at, but everything else has a sort of rushed feel to it. It works well during the action scenes, as they need a sense of urgency to them, but in the quieter scenes you tend to notice that more in a negative light. Like I said though, it’s generally solid and it serves its purpose.

My only main concern right now is the longevity of the book. As it’s explained in some of the character’s solo or team books that have been released this month, something really bad went down that disbanded the team and set their course for where they stand now in the DCU. What and when that happened will no doubt be explained, but knowing that there is a finale, and that it has a giant impact on these characters makes me wonder how long they can draw it out. Obviously if the book gets cancelled, then they have to tell what happened, but teasing from the get go that there is this immanent danger and finality to the team makes me slightly antsy. Like no matter what happens, there will be this gloomy shadow hovering over the story.

Verdict:
If you like action-heavy comics or the characters involved then chances are you’ll enjoy this book. It’s a solid origin story that does it’s job well and I’m really interested to see how they work together as a team. The book does have its flaws, but it certainly was good enough to bring me back next month and if you have any interest in this book, give it a look and see if it’s for you.