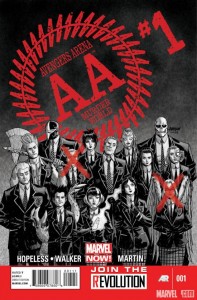 Almost everyone has heard of “The Hunger Games” I like like to hope that more than some people have heard of “Battle Royale”. Now close your eyes and picture those to films, only everyone has a superpower. Sounds cool right? That is what Marvel is hoping you think with their newest announced series for the Marvel NOW initiative. Last week Marvel stumped the internet world when they posted one word, Survive, splattered in blood. Nobody knew for sure what it was but everyone had a guess or two. Today Marvel.com debunked most of those guesses by revealing writer Dennis Hopeless and artist Kev Walker’s upcoming Marvel project, “Avengers Arena”. “Avengers Arena” will bring together some of the Marvel U’s youngest heroes, who have been rounded up by the supervillain Arcade, and placed in Murder World to partake in a “kill or be killed” game.

If you have been enjoying Christos Gage’s “Avengers Academy” series as much as I have rest easy knowing that when that series ends you won’t have to wait long to see them again. The same goes for fans of The Runaways. Editor Bill Rosemann explained, “Fans of Avengers Academy will hopefully be excited by the next chapter in the lives of Hazmat, Mettle, Reptil, Juston and his Sentinel and X-23. Speaking of schools, who are the Braddock Academy? After his last appearances in War of Kings and Nova, Darkhawk soars again! Staying with sci-fi, just wait until you see what Dennis and Kev have planned for Annihilation’s Cammi, baddest girl in all the galaxy. And last but certainly not least, direct from the pages of the dearly missed Runaways, we have Chase and Nico!”

Marvel.com talked to “Avengers Arena” scribe, Dennis Hopeless, a bit about the book. “The rules change when you say, ‘kill or be killed’ and mean it. Your options become fight or die. Some characters are better equipped to deal, but none of these kids are getting out here clean.” Hopeless also commented on his cast for the books, “We really got to cherry pick our cast. That was a lot of fun, almost as much fun as creating the brand new characters. I have a feeling the Braddock Academy kids in particular are going to break some hearts. Not sure if we made it clear yet, but people die in this book.”

This is definitely a bold and interesting choice for Marvel. Be sure to keep an eye on this book come December and “May the odds be ever in your favor!”