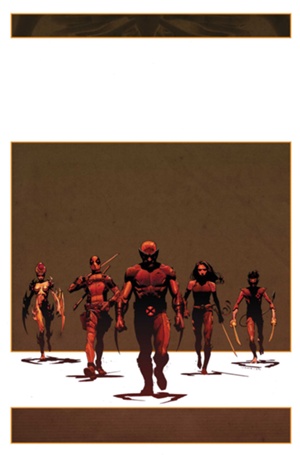 I feel sorry for a lot of people, but those who have never read an Uncanny X-Force issue under Remender’s pen are the ones I truly pity. With the announcement that Uncanny X-Force will end at issue 35, each issue leading up to the end will pack a punch like none other. I have faith that Remender will not disappoint me with wrapping up this fantastic Marvel series.

There are times that I get goosebumps while reading a comic book. J. H. Williams III’s artwork does that to me. Any scene with Stephanie Brown does that to me. And Uncanny X-Force #31 does that to me. There were multiple moments where I sat there in disbelief, stunned silent by the complications in the plot. This is a thinking man’s superhero comic book, and issue #31 really delivers on the tough questions.

Back from the future, the X-Force must retrieve Evan from the clutches of the Brotherhood led by Daken. Daken and his team aim to turn Evan from a sweet, gentle young man to the Apocalypse we learned to fear from previous X-Men encounters. Fantomex did all he could to love and nurture Evan as a child, but there is a strong possibility that his work could be undone by a band of evil mutants with revenge and chaos on the mind. Evan had been misdirected, deceived, and psychologically tortured during his kidnapping. The most devastating moment in his captivity occurs when the Skinless Man tricks Evan into believing Fantomex (lovingly known as Uncle Cluster) was alive. Skinless Man leaves Fantomex’s dead, rotting body in Evan’s cell in an attempt to hasten his upsetting break.

If that’s not enough of a reason to hate the Brotherhood, then I don’t know what is.

It’s amazing how much Remender packs into a single issue. Besides focusing on the X-Force and Evan, we catch a glimpse into the inner workings of the Brotherhood. Intimate conversations between Mystique and Sabertooth highlight the relationship Sabertooth and Wolverine have (referencing years of comic book history at the same time—don’t you just love continuity?), and Sabertooth begins an intense manipulation of Daken to deepen his hate of his father Wolverine. Sabertooth has something in mind, and it’s not just killing Wolverine.

The team now as only two options. They can either rescue Evan and attempt to undo all the evil he’s experienced in the past few days to prevent Apocalypse from happening, or they can kill the child like they did in the first place. In the end, it all goes back to the big issue in the first arc of this series: Should we kill a future monster?  There is no easy answer when lives are at stake.

I’m excited about this issue. It was emotional, horrific, and psychologically twisted. Rarely do I find a superhero comic with this level of thinking (Rachel Rising comes to mind, but it is certainly not about superheroes). I recommend picking up this issue and issue #30. It’s the final arc in a fantastic series that you should’ve been reading this whole time.