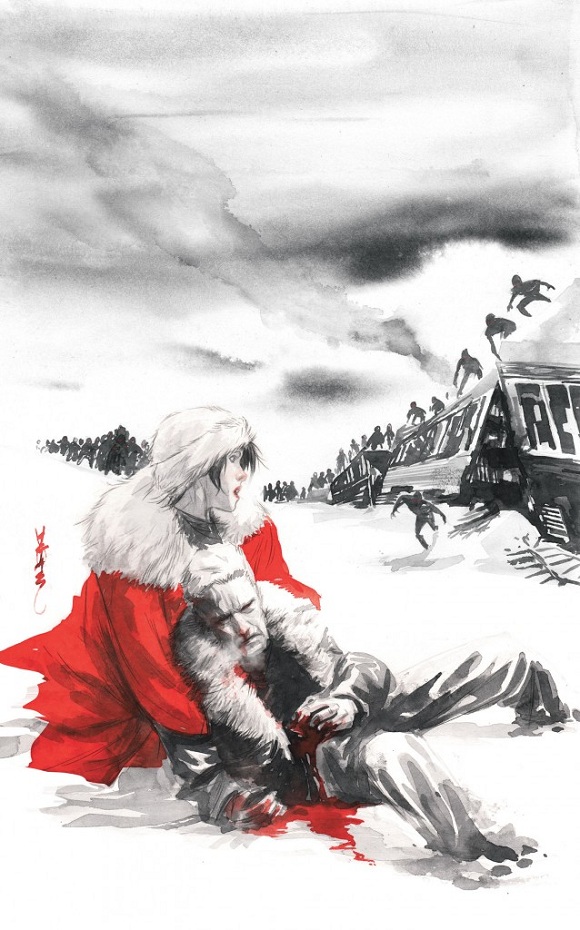 I’m so amped up to actually see our titular bad guy that my mind is wandering through all the possible incarnations he could be revealed as. Of course, he could be Stoker’s Dracula as we have known him to be. He could be something drastically different like an imposing hulk of a figure. Hell, he could be a tiny, nasal, shrimp of a man and turn out to be one big joke. We don’t know, and that is what is so great about this story. Even in the penultimate chapter, we still haven’t reached the crescendo. Scott Snyder has given us horror in Swamp Thing, action in Batman, and some drama in American Vampire proper. With Lord of Nightmares #4, Snyder is proving that he may just have the chops for the thriller genre as well.

Dracula has his minions rampaging trying to find his next Renfield, Hobbes is desperately trying to recruit some help to stop him, and poor Felicia and Gus are along for the ride. This is another exposition heavy book in the series, and again it isn’t a bad thing. Things have built to a head and are coming to the climax in the near future—it’s just a matter of getting your hands on the next issue. I’m not usually one to want a book to double ship, but I find myself really aching to get the next chapter of American Vampire as soon as I put it down. Scott has an uncanny ability to craft griping stories and characters, but sometimes it’s the things that he leaves out that end up being the best part. Hobbes is a character that we have known for over 40 issues of collective AV stories, and it is only now that we get a real character moment from him. Snyder gives us a glimpse into his past with Dracula, and it is just crushing. I never really felt anything for Hobbes, but I can’t help but sympathize with him now. It justifies his intentions. It clarifies his deep motivation.  It makes him a real person.

Yet again Dustin Nguyen delivers in the art department. His art may not be as striking as Sean Murphy or Raphael Albuquerque’s, but it is the small things that make it so great. There are times in this book that I have seen things that I don’t get from a usual American Vampire book. Some of the leaches in this particular story almost phase into vampire form– Skinner and the usual crew just kind of change instantly. For the new guy, think along the lines of the Hulk. It’s a process. When Bennedict gets to an emotional high point, his other side’s features begin to show through. It’s a subtle touch, but those things really make you respect what Nguyen is able to do.

Buy it. Get on board with American Vampire, people. I feel like a broken record with these books, with the telling you to buy them all the time, but they truly are some of the best books on the shelf every month.