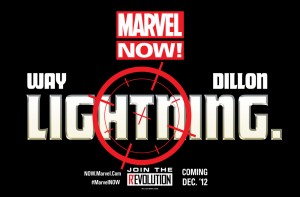 It appears that Marvel is ramping back up with their one word hints at books to come in the opening months of the Marvel NOW! launch. After seeing the fold spread of the Avenger’s cover on Monday the hints have just kept on coming. Tuesday, Newsarama posted on their site that Daniel Way and Steve Dillon will be having their series starting in December of 2012. The hint for the series is Lightning. In the Marvel U there are plenty of areas you could go with this. Thor would be most obvious but Jason Aaron’s run was announced already. Storm could be a candidate I suppose but the best guess at this point would probably be “Thunderbolts”.

Way is concluding his “Deadpool” run in the coming months. If Lightning does indeed mean “Thunderbolts” and knowing the kind of teammates the Thunderbolts tend to attract it will be curious to see if Way will continue to write Deadpool as a member of the Thunderbolts. 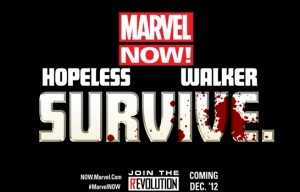 Marvel got me on this one. Yesterday, Bleeding Cool revealed the newest Marvel NOW! teaser and it reads one word: Survive. This new series is written by Dennis Hopeless and drawn by Kev Walker. Marvel has been pretty obvious in its hints for its Marvel NOW teasers thus far but this one seems to have stumped the entire internet collective. The Survive has been splattered in blood and is hard to pin what the word could be exactly. Seeing a blood splattered word I almost always jump to zombies but that could just be a knee jerk reaction. Could this signify a Marvel Zombies? Perhaps it could be a certain faction on the run in the wake of AvX? Is it possible that Marvel is creating an entire new series and characters for the launch. 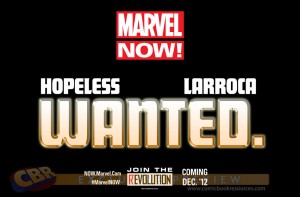 Today Marvel revealed not one but two teasers. The first was revealed by Comic Book Resources and had the word Wanted on it. The series will be written by Dennis Hopeless and Salvador Larroca will be heading up this mystery title. Hopeless will also be writing the title teased by the Survive word and as with that teaser it seems that Marvel has stumped us all and it is hard to figure out what or who the characters would be based upon this trailer. It is possible that the new book could be about outlaws of some kind, perhaps even a group of them.

The other teaser released today by Marvel over at Comics Alliance is the word Killers in purple. The book will be handled by the current writer of “The Ultimates” Sam Humphries and the art duties go to “Ultimate Comics: Captain America” Ron Garney. Marvel continues the hot streak it has been on with its trailers the last few days. Marvel did say earlier today that the Killers and the Wanted teasers stories once they came out would be connected. Other than that the majority of the second wave of Marvel NOW! teasers remain shrouded in mystery.

What could Survive, Wanted, and Killers stand for and mean for the Marvel U when they come time to launch in December and January? Have an opinion on what the teasers could mean? Drop a comment below and let us know what you think.