FacebookTwitterPinterest
Insufferable returns for another helping of family discourse as Galahad tries to figure out if Nocturnus killed his mother. At the same time Nocturnus is attempting to figure out who's the mastermind pulling Galahad's strings... if only Galahad wouldn't get in the way. 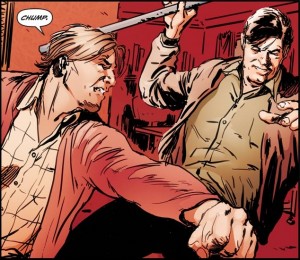 “What happens when you’re a crimefighter and your sidekick grows up to be an arrogant, ungrateful douchebag? What on Earth could draw the two of you back together again?”

Insufferable again for another helping of family discourse as Galahad tries to figure out if Nocturnus killed his mother. At the same time Nocturnus is attempting to figure out who’s the mastermind pulling Galahad’s strings… if only Galahad wouldn’t get in the way. Most of our point of view is directed at Galahad, watching as he’s following some super villain’s bread crumbles and making a mess of things. Galahad is desperate to believe whatever evidence he can, “find,” because he wants to hate his father and believe Nocturnus is ultimately responsible for his mother’s fatal car accident.

On this misguided quest, we get to learn a few things about Nocturnus and he’s not happy to learn that he’s being, “framed,” for his wife’s death. At this point we’re not entirely sure if her death was an accident or by design, but we’re lead to believe there was a mist of complication about it that might suggest Nocturnus was involved somehow. For now though we disregard it because the only source that gave us that information is a super villain, but it leaves me in a state of suspense to figure out how Nocturnus was truly involved. Was it a car accident in the first place?

I find myself constantly doubting Galahad’s point of view, and even his recollections, because they are that of a child’s and a nasty child’s at that; even average children recall events out of proportion and sometimes blot out entire segments. I get the feeling there’s  more going on beneath what Galahad considers the truth and he’s just being set loose on Nocturnus as a distraction to let the real mastermind go unimpeded.

Lastly, but certainly not least, there’s Meg the publisist. I like her character, she’s honestly the person trying to defend Galahad but actually sees Galahad for who and what he is; even admitting that Nocturnus has a point in many of his actions.  I think she’s build to serve as an arbiter figure, though clearly she sides with Galahad simply because of her job status, and it would stand to reason she’s the least clouded by the family discourse. I look forward to seeing what happens with her and potentially exploring her reasons behind supporting Galahad despite what she already knows.