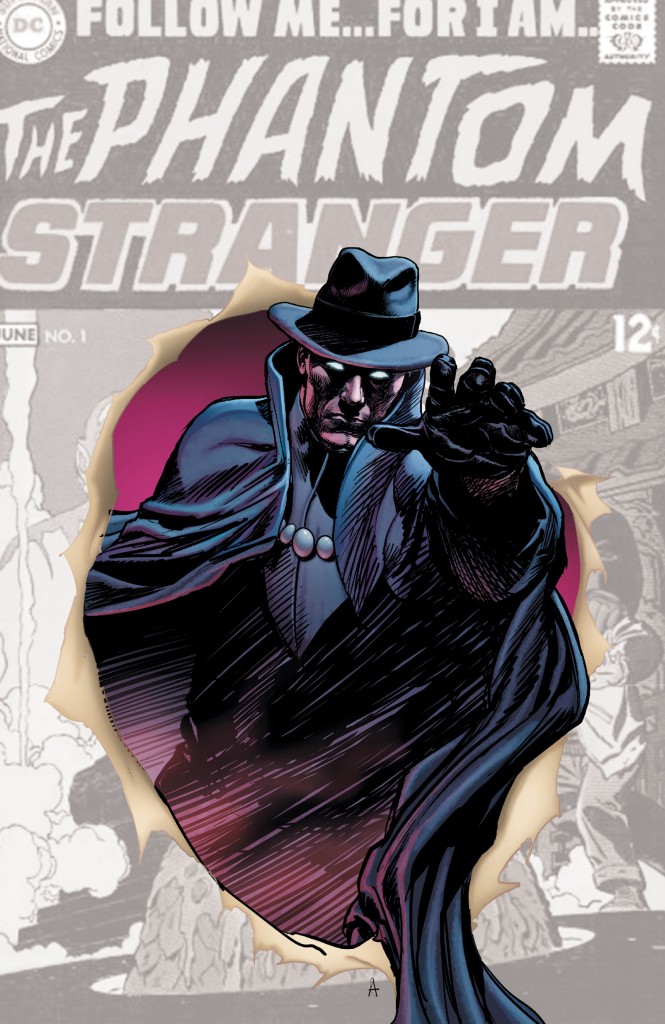 What’t the worst thing you’ve ever done? Oh, I don’t expect you to tell me, I just want you to think about it. Now that you’re good and upset with yourself imagine if that guilt was enough for you to want to end it all. This is a cheery review, isn’t it? Well, what if after committing suicide for a life of sin that death simply was not an option for you. What if when you finally had the decency to off yourself you found that those who were in charge of your judgement decided that you need to suffer just a bit more? What if they decided that you should suffer for all of eternity? Bummer, I know.

From out of the shadows of the DC New 52 comes The Phantom Stranger #0. Three strangers, charged with being the greatest transgressors mankind has ever known, are each sentenced to their own damnation by a counsel of Wizards. One man in particular, because of his blatant avarice throughout his life, has been cursed to roam the plains of our earthly realm while trying to repent for his innumerable sins. This is the plight of The Phantom Stranger. Adorned with a necklace of silver pieces (the weighted representation of his sins against humanity), the Stranger must use his new gift of vague omnipotence to piece together the fates of those who cross his wicked path. With powers unknown he walks the streets. Whispering, interfering, and hoping to bring salvation to the people he’s forced to follow, The Phantom Stranger wants more than anything to repent. It’s too bad that things don’t always work out the way you want them to.

It’s strange. I’ve read The Phantom Stranger #0 three times and I still can’t pinpoint exactly how I feel about it. On one hand I think the premise is very cool and that the tone matched the content perfectly. It’s dark,  moody, cryptic, and it gives you a sense of walking inside the shoes of a character who still has so much to reveal to us as readers. However, on the other hand I think I’m having trouble grasping the idea of reading a book about a character whose powers are seemingly limitless. As much as I enjoyed the otherworldly presentation of the book I’m curious as to what exactly is going to be a threat to the Phantom Stranger in the issues to follow. How do you challenge someone who is all powerful? Also, how many medallions does that necklace hold?

Of course, these are questions that will only be answered by reading more than one issue of this brand new addition to the DC New 52. It’s not the strongest beginning but it certainly has enough going on that I am curious to check out the next issue if only to see how Dan Didio chooses to handle a character so vast and mysterious. I’m also on board for another issue or two because as terrible as The Phantom Stranger was in his previous life to have been bestowed with his current set of circumstances and powers, I really would like to know who the other two prisoners were that stood with him on that fateful day. There’s only one way to find out.

VERDICT: There’s no better place to start an addition to the DC New 52 than with a #0 issue of a brand new comic. I would advise that perhaps you read the first few pages inside the store to see if The Phantom Stranger #0 is your bag. However, if you’re one of those dedicated people who are collecting all of the #0 issues to complete your collection you might find that you’re going to be adding another book to your pull list if cryptic characters are your thing.

* This review was written while listening to the album Centipede Hz by the band Animal Collective.