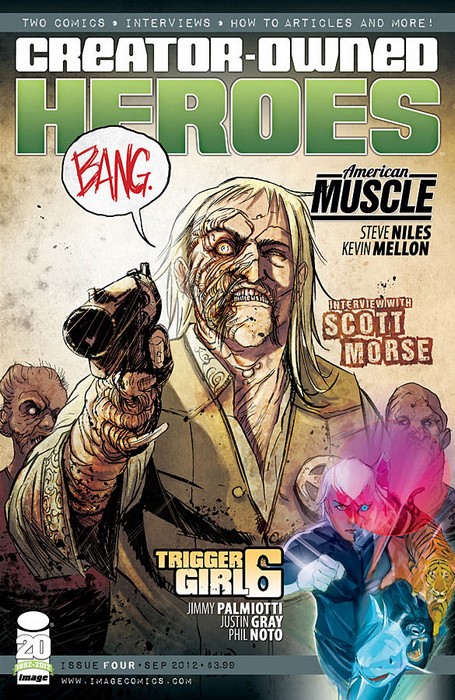 I’d like to start off this review by summing up both of the main stories included in it, rather than focusing so heavily on them. There is a good reason for this: Creator-Owned Heroes #4 definitely delivers on the stories, but the real heavy hitters in this issue are the extra articles and interviews.

As I’ve said in my previous reviews of this title, both Trigger Girl 6 and American Muscle are great stories, each well written with top notch artwork. In #4, both stories seem to be concluding, at least for now. Trigger Girl 6 discovers her makers and her purpose, but is left still pondering her place in the world once her main objective is drastically altered. The conclusion of this story is unexpected and carries a ‘moral’, which is something you don’t see so often in comics these days. American Muscle doesn’t stop being a wild ride as the crew of survivors set out to follow the map they stole, being trailed by the owners of said map who are out for blood. The crew battles yet again for their lives and in the process make a discover that the paradise they have been searching for may not be so out of reach after all. A swift and clean conclusion to a story I will miss reading.

Creator-Owned Heroes #4 announces two upcoming stories to look forward to: Killswitch and Black Sparrow. I don’t doubt that these will bring as much substance and creativity as the first two stories.

Now, on to the real meat of this issue, the articles. Writer Justin Gray (Jonah Hex, Trigger Girl 6) shares an intellectual observation on heroism in modern culture. What does heroism mean now? What does it lack? What should heroism be and can we get that back? He also shares his viewpoint on the ‘myth of writer’s block’, which although may not be a popular view with many writers, I felt was a reasonable and thoughtful one.

Jimmy Palmiotti updates readers on his latest comings and goings, including his time spent at SDCC. Contributing creator Steve Bunche ponders the evolution of Cons and how his feelings on them have changed since his first childhood experience. Editor and writer J.C. Vaughn talks ‘courting’ an editor for creators struggling to get their foot in the door of the comics biz. There’s also a fun little article by artist Kevin Mellon, who talks a bit about his tools and technical approach to creation.

My personal favorite piece of Creator-Owned Heroes #4 is an interview of writer, artist and animator Scott Morse by Steve Niles. They cover lots of interesting topics including the growth of his art style and writing, his feelings on writing up or down for particular age groups, comparing the experience of working for mainstream comic giants with doing creator owned work and the birth of TRICKSTER, a  market of sorts that focuses on creator owned publications and runs side by side with SDCC, offering a less commercialized comic industry experience. The interview is engaging and full of insightful ideas, even for a simple reader, like myself, who is not a creator. Steve Niles asks the right questions and Scott Morse shares much of himself in return.

Verdict: Keep buying Creator-Owned Heroes. Although much of the material in these books is geared toward artists and writers, readers and fans of the comic industry should find the insider looks at creation equally interesting as the ongoing stories. I don’t believe there is another series of comics being published right now that offer so much quality material for the price. Each issue of Creator-Owned Heroes grows and improves, which means you should be on this train right now to avoid missing what is sure to be a fantastic ride ahead.