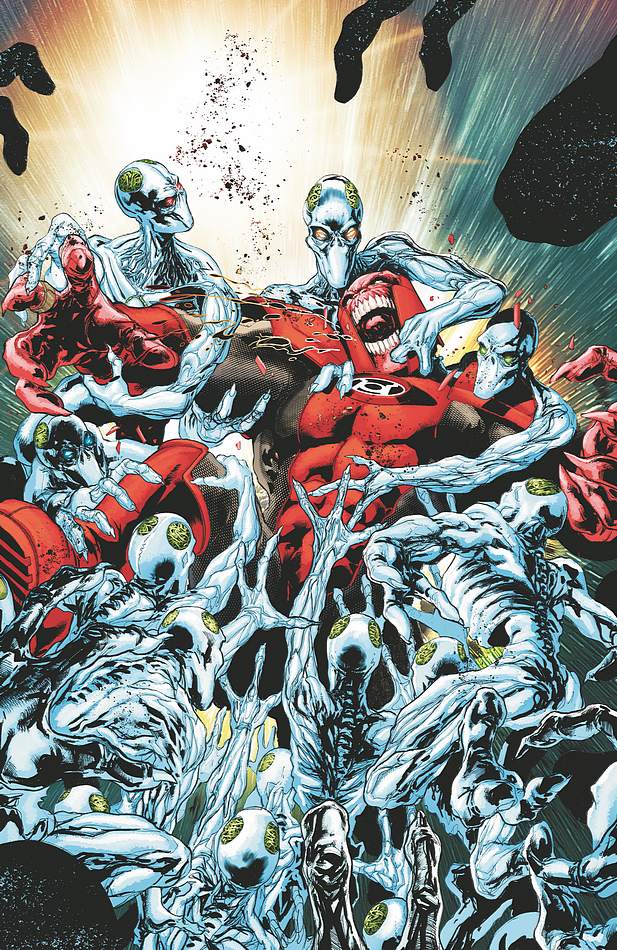 After the events of the Green Lantern Annual, the status quo of the Lantern universe has been changed and it’s introduced a new threat known as the Third Army. These faceless humanoid creatures are on a quest to destroy the Lanterns and Peter Milligan’s Red Lanterns have a giant target on their back. Newsarama recently talked to Milligan about the upcoming event and how Atrocitus and Rankorr plan on dealing with them.

While every spectrum of emotion is dealing with the Third Army in their own way, Atrocitus is facing a moral and philosophical dilemma that has him questioning his own beliefs. “The Third Army seem to negate everything they are, or stand for. The Third Army don’t feel rage. They just go about their deadly way like a disease. For a creature like Atrocitus, who has built his credo and his life on the principles of rage, this is anathema…(It) forces him to face once more the pivotal event that changed his life: the massacre of sector 666. It’ll also force him to hitherto unimaginable ends in an effort to save his corps. The Red Lanterns are driven by a will: a raging will for vengeance and retribution. So the Third Army represents their opposite. It’s clear that these groups can never co-exist: one of the will have to be destroyed.” Milligan explained. “It’s going to push Atrocitus into some very interesting areas. It’ll force him to do things he couldn’t have imagined doing—and even bring him to a place where he questions whether – after all this time – rage is really the answer.”

Atrocitus isn’t the only one dealing with a crisis, the human Red Lantern Rankorr will be dealing with some personal demons that have haunted him since the beginning of the series. “Atrocitus realizes that to fight the Third Army they could really use Rankorr’s constructs. But his constructs are shaky. Rankorr still hasn’t got full control over this power. The only way he is going to get this control is to find ultimate vengeance on his “rage giver”: the thug who killed John Moore/Rankorr’s grandfather. Only when a Red Lantern has hunted down and brought retribution to his rage-giver does a Red Lantern achieve his full potential.”

The problem with any event though, especially if you are only reading one or two books involved, is whether or not you’ll need to read everything pertaining to the event to fully understand what’s going on in your book’s story. Milligan understands this.

“Sometimes the story is going to literally cross over. But at the outset, Atrocitus and the Red Lanterns are on their own, and they feel on their own. They’ll have to figure out how to fight this strange and deadly new threat. And when Atrocitus realizes that the Red Lantern Power Battery is still underpowered (they’ll need all the juice they can get to fight the Third Army), it’s down to Atrocitus and his corps to try to do something about it.” He does recommend reading the other books to fully grasp the situation though. “In some sense, the Red Lanterns are undertaking their own stories, and they make sense by themselves. But I think reading the other books will make the actions of the Red Lanterns – particularly Atrocitus – a richer experience.”

While not usually a fan of events, saying his “heart sinks like a big heavy sack of porridge when I hear the word “cross-over” or “event,” he does think that The Third Army has the potential to be great, saying that he “loves what it’s doing to the Red Lanterns.”

I know I’m looking forward to what’s in store for the Red Lanterns, let’s hope the rest of the books are just as good.

The Third Army event starts with Issue #13 of all the Lantern books which will be released this October.