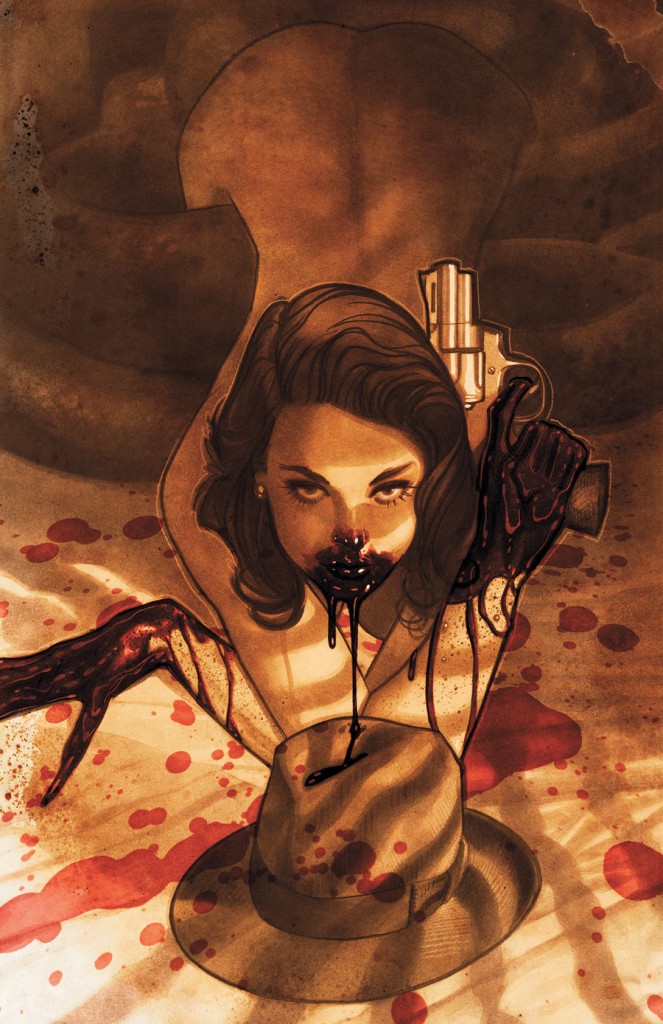 The introduction of Fables to the comic world allowed for the reinvention and “true” story of our favorite comic book characters to be told. Since then, we’ve seen unlikely relationships develop, children born, and uncovered the nature of some of the most innocent-seeming characters. The personalities and stories told since Fables has been published have become the real story.  Fairest continues in this tradition, focusing on the ladies of the storybook world. This time, it’s Beauty and the Beast’s turn.

Before we dive into the issue, let’s pause and appreciate the cover. Adam Hughes brings it each month with his female-centric covers. The blood, the gun, the look, the snake body…all of it is gorgeous.

From the cover and the issue title, we know that Sturges is introducing a Lamia to the Fables universe. With her charm and thirst for blood, this Lamia is wreaking havoc in Los Angeles in 1946. Beast is on the case and narrates his previous encounters with the monster to Beauty. The ongoing conversation with Beauty is wonderful. It’s truly the best way to illustrate the deep connection these two have. Beast really lives for Beauty, and being without her for an extended period of time is stressful to him.

The deaths of the men in the town prompt Beast to investigate deeply. Though we do not know his motivation in the beginning, we understand that he is used to hunting her down. He knows her motivations, her patterns, what she looks like in human form. When I think of Beast, I typically do not think of Lamia. If this isn’t the first clue to the Lamia’s identity, then I don’t know what is.

Beast eventually finds the Lamia in her human form at a nightclub selling cigarettes. She resists him, running from him as she turns into a snake. Beast doesn’t leave empty-handed, though: He learns the Lamia ensnared another man. Beast isn’t the only Fable on her trail, though. Saint-George arrives before Beast, ready to break out his dragon-slaying techniques when Beast takes him out. Which leaves the reason why Beast is the one to track down Lamia: she and Beauty are one and the same.

I’ll leave the story of how that happened for the book. Beast continues to write to Beauty in an attempt to share her own history, the frustration and weight eventually overcoming him. Beast never tells Beauty. He never tells her who she really is. He continues to live like nothing is wrong, that the moments in which Beauty loses her memory are simply “spells” of dissociation.

There’s the matter of Beast’s relationship with Beauty. He knows her identity, how she came to be. Yet, he fell in love with her, despite being a shadow of a former person. Never revealing her past, Beast is content living like nothing is wrong. The last page reflects on the current time. Beauty and Beast are touring Haven with their child, contemplating relocation. Though the story takes place in just one issue, it will likely have an effect on the other Fables and their child.

This one issue is a great buy for people who are interested in Fables but never read an issue. You don’t have to know a complicated backstory, you don’t need to know the complexity of interactions between the Fables. You just need to know that Beast loves Beauty, that it’s a great single issue, and a good starting point for new Fairest readers.