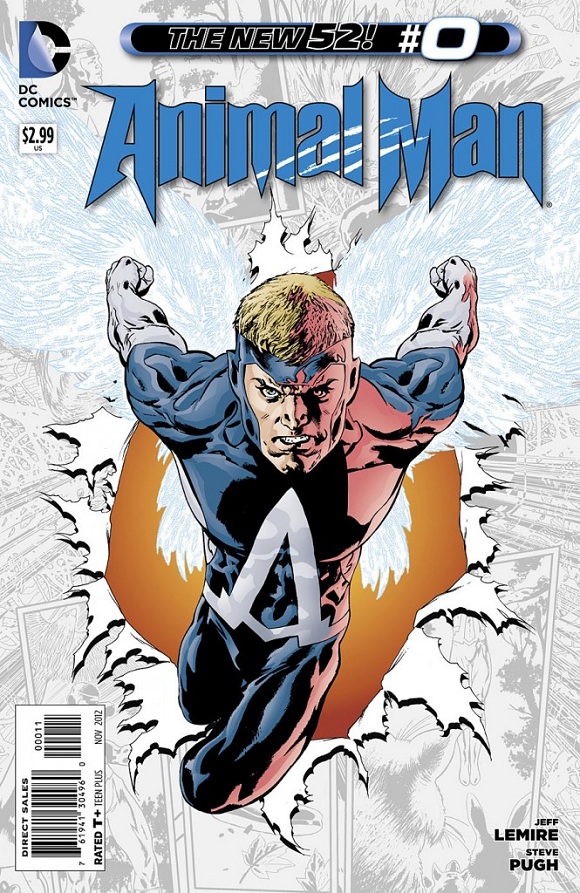 I was very hesitant about DC’s plan for September. A month’s reprieve from the books we love, to look back on the origins or early days of our favorite heroes. Why break the momentum that we have built up to this point? Most of these books are moving along full steam ahead, and it just didn’t seem (Stephanie may be rubbing off on me) necessary. Take note of this moment, you may not get to see this ever again. I was wrong.

Animal Man #0 is ridiculously awesome. Jeff Lemire takes threads from his story, and incorporates them with the iconic Grant Morrison run. I love it when creators know the history of the character they are helming. Most of my favorite stories come from writers taking something we know and put their own spin on it.  It’s why Geoff Johns can be one of my favorite writers, and the same goes for Grant Morrison. Jeff Lemire gives us an unbelievably well connected story, and one that makes you appreciate his love for Buddy Baker even more.

We start with someone that is new to me, a previous Animal Man. It sticks with the idea that has come forth with the Animal Man and Swamp Thing books to this point; throughout time there have been avatars of the Red. Along the same lines we are shown that, though the Rot is a new idea, it has quite the history. From there we see the origin story of the Animal Man we know. This isn’t a straight forward origin story, and it explains a lot about Lemire’s focus to this point in his run.

When Animal Man launched in the New 52, there was universal praise for the work Travel Forman was putting out—and it was phenomenal. But Steve Pugh has given us equally great work in his time with the Baker family. His style is versatile enough to be gruesome and grotesque to almost whimsical. It’s a perfect marriage of art to story. The only complaint I have about this book is that Cliff isn’t sporting his mullet. It’s a travesty.

Buy it. Animal Man #0 renewed my enthusiasm for DC’s comics this month. It’s a perfect take on an origin story, as it mixes the old mythology with the new. This book will please those who have been following the series.