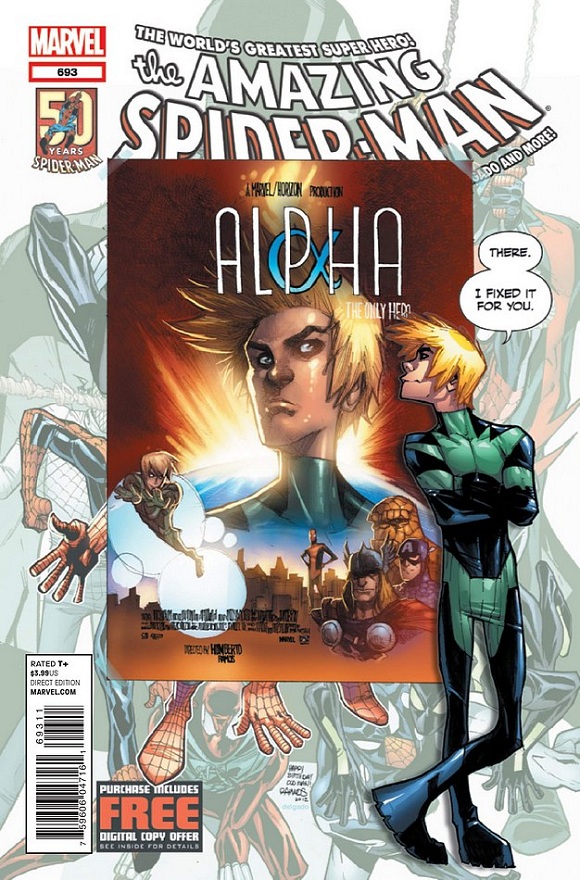 Amazing Spider-Man #693 is a mixed bag for me. It’s far more good than bad, but there are some things that I’m still left wondering about from the end of Slott’s Lizard run. Alpha is here in a big way, whether we like him or not. He is constantly present through the book, but this is a Peter Parker story. I’m happy about that. For a 50th anniversary issue, I thought #692 was too focused on Alpha. #693 reigns it back in on our favorite web-slinging hero.

Peter is in some deep trouble with his new side kick. There are some really good moments for web-head when he’s coming to grips with understanding the similarities between them, and what he is going to have to do moving forward. Along with all this character work, we continue to get my favorite part of Spider-Man books, the humor. Spidey is a quipping fool in this book. And that is fantastic. The cameos from the Fantastic Four are hilarious also. The humor is a part of this book that can’t be left out, otherwise, Spider-Man can be a very dark and depressing character.

Alpha continues to be a character that I am not fond of, but I get the feeling that Dan Slott may not want us to like him yet. I can deal with his character if not only to see what affect it will have on Peter. There will be some fallout between these guys; it is just a matter of what will happen. The best moment in this book may be a conversation between Peter and MJ about just what to do with Alpha. It’s so touching, heartwarming, and just an all-around great character moment.

Humberto Ramos has done extremely well on Spider-Man. I absolutely love his style for this book. He doesn’t make giant hulking figures, and it’s almost cartoony at times. That works well for Spidey. He doesn’t need some over realistic, painterly imagery in order to be supremely effective. I wasn’t a big fan when I started picking up Amazing Spider-Man again, but after a few issues I grew to really love his style.

POSSIBLE SPOILERS FOLLOWING: Coming out of No Turning Back we were introduced to, what we thought was, the next villain. We also had the Kingpin scheming up new ways to hinder Spider-Man. None of these plot points have been hit on in the past two issues. It’s a bit of a disappointment to have the Kingpin take up as many pages as he did in No Turning Back, and have nothing done with it in (at least) two issues. It’s a personal problem. And I realize Slott could be ramping up to tying those threads off, but I would hate to forget about it by the time it actually picks up.

Buy it. Amazing Spider-Man #693 is building a really emotional story for Peter. How does he save this kid? He had people around him to shape him, but how do you get through to what is virtually a demi-god? I can’t wait to see where this is headed as we ramp up to #700.