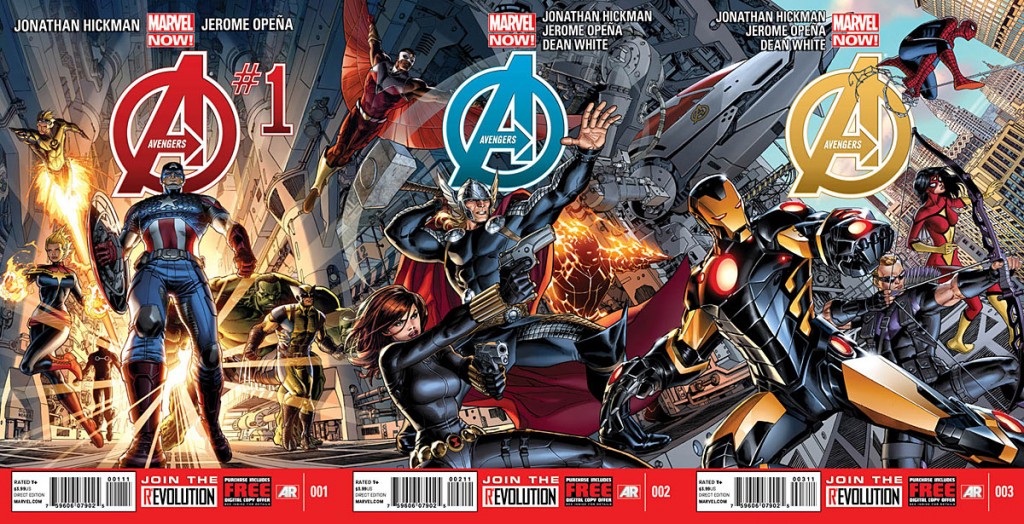 You had to expect it was coming eventually. These last few weeks Marvel has been rolling out previews for a bunch of their upcoming Marvel NOW! titles. Today they gave the fans the roster for Jonathan Hickman and Jerome Opena. Marvel finally shed some light on their roster by revealing it in the form of a gatefold cover which will be the covers to issues one through three of the new run.

The covers reveals a noticeably bigger team than that used in Brian Michael Bendis’ current “Avengers” run. The roster includes: Captain America, Captain Marvel, Wolverine, Hulk, Cannonball, Black Widow, Thor, Sunspot, The Falcon, Iron Man, Hawkeye, Spider-Woman, and Spider-Man. The roster is a mixed bag of Marvel’s most popular characters as well as some of their lesser knowns. Not surprisingly, the new roster includes every member of the Avengers movie line up.

You would think a cast this large would be plenty for all the parties involved (writer, artist and the readers) but that doesn’t appear to be the case. Hickman noted today on his Twitter account, “Image released today is not the complete roster, we intentionally left off new characters for spoiler reasons.” He said that eight more characters more characters were yet to be revealed. Will they presumably be on the cover for issue 4 to continue the wrap around theme?

Initially the word was that the roster would be at 18 characters. That now seems to have changed. With 13 characters now confirmed and eight more on the way (not to mention the character hiding in the shadows near the back of issue 1) the internet will without a doubt be a buzz in the coming months as to who will round out the roster.

All said and done the roster will have almost two dozen characters in it. If there is a man at Marvel who knows how to juggle an insane amount of characters though, it’s Hickman though.