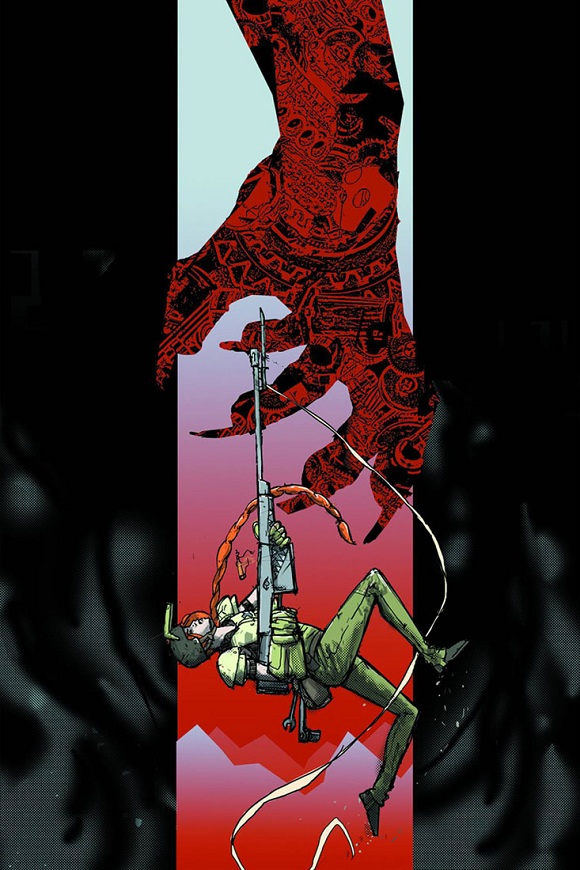 I love when new series get launched. I’m always going to jump on a new #1. Whether or not I like it is another thing entirely. Anything that puts strong characters against seemingly unbeatable odds is pretty enthralling. When you add in gigantic transformer-trash-monsters, how can you go wrong? That is what we have with Kurtis Wiebe’s Debris, and it is a fun read.

After the fall out of the first issue, our main character is out in search of a supposed mythical place. Which supposedly has what her town needs to rebuild their demolished water town. What we end up with in Debris #2 is a bit of a world building tale. Things may not have been what they seemed, but it isn’t going to change the main goal. We get introduced to another character, and with him we may see things open up. You have the possibilities to play with what we know, and what the past may actually have been. He’s a character that will cause our Protector to question those whom she looked up to.

Riley Rossmo isn’t a name I know much about. That’s not to say it is a bad thing. There are times that this book is just as gorgeous as any of the big 2 publisher’s books. Those times are usually in the heat of battle, or introducing a new junk beast. Then there are times where things look a lot off. Things take on oblong, rounded forms and it throws me off a bit. It’s not something that ruins the experience, because the good far outweighs the awkward.

Debris is only shown to be a four issue run, and I’m interested to see just where Wiebe can take is in the short time this book is scheduled for. I’m not sure how deep things can get here, but it looks as if it will be fun nonetheless.

Kurtis Wiebe is one busy dude. Between the great book in Peter Panzerfaust and the love story Grim Leaper, Debris has a lot to live up to. I believe it does, and can’t wait to see what we get next.