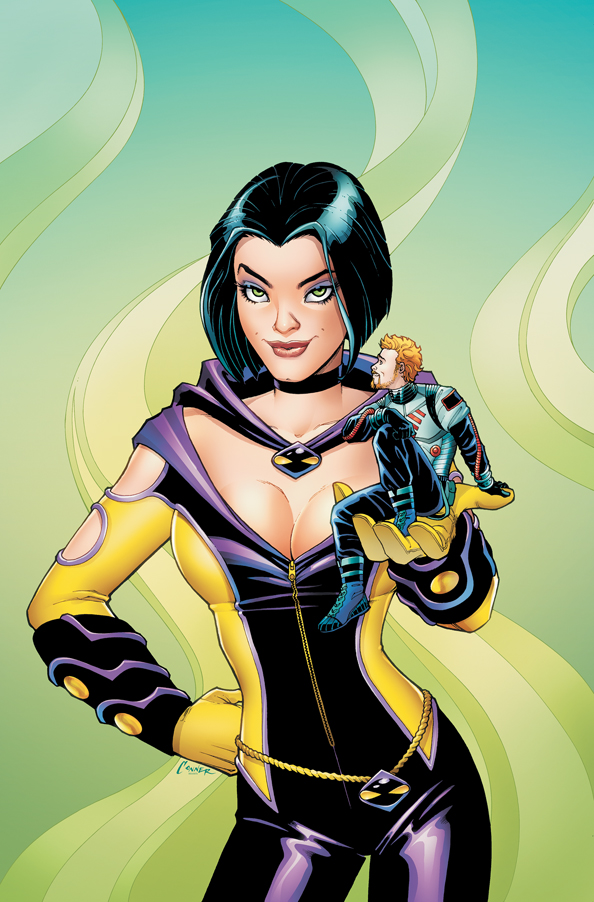 One must be careful when sticking their nose in where it doesn’t belong. DC Comics has certainly had it’s share of reporters equipped with balls of steel, and Jennifer Knight is no exception. By following in her father’s footsteps she’s taken to investigative journalism. Only, in regards to her latest story she’s bitten off more than she can chew. You see, The Bender family is a bloodline of vicious psychopaths who back in the 1800’s murdered a bunch of people while planting their evil seed all over the globe. Now those ancestors are in Metropolis and innocent people are being made to suffer as a result. With the help of her friend Dane, Jennifer is looking to put the Bender Lieutenants away for keeps, and hopefully get a first hand exclusive while she’s at it.

I’m not quite sure what to make of Phantom Lady and Doll Man #1. One one hand I like the realistic and gritty feel of the city/nightclub scene along with the potential for some solid character development, but aspects of it left me feeling a bit put off. The beginning of the book was in my opinion off to a really great start. After a tragic first page flashback we’re transported to a display of some pretty amazing powers by Phantom Lady herself. The tone is what you’d expect from some of the darker DC Comics fare but then the comic suddenly sets us back 6 months and becomes very different.

I think it’s rather disappointing when in the first issue you really don’t like one of the book’s main characters. Dane, while loyal to Jennifer, later struck me as a spineless nag, and later on, a complete coward. Now perhaps his character will grow over time, as the new set of circumstances he’s given by the end of the first issue will surely change his perspective quite a bit. I really just hope that it doesn’t take too long for him to come around.

Okay, so I just did a bit of research and have discovered that Phantom Lady has been around since the 1940’s, which means she’s a Golden Age gal. So I guess the statement on the book’s cover “Renewed, Refined, and Ready for Revenge!” was their way of telling me that she’s back in action. Knowing now that Phantom Lady has been a bit of a controversial figure in comic books due to her being placed in provocative situations and pin-up poses I’ve got to admit that I’m a little more intrigued by where this series could go.  Not that I’m a hound dog or anything, but I do like a comic that’s got a bit of an edge to it. So with that in mind I think I’m going to lay off Dane for at least another issue or two and see if the story picks up a bit more steam.

It’s often difficult to make your audience aware of everything within the confines of one issue. And while Phantom Lady and Doll Man #1 didn’t blow me away those first few pages gave me a taste of what’s to come and it was rather tasty. If we can maybe give Dane a bigger pair of balls and perhaps feature a bit more of Jennifer’s personality I think we’ll be in business.

VERDICT: Wait and see: I’m digging the book the more I think about it but I’m not sure it’s going to be for everyone. It’s grimy, it’s baiting, and a little bit sleazy, but I’m kind of a fan of that sort of thing so take that as you may. I think the book has got some potential but I’ll have to wait another issue to tell you for sure whether you might want to spend your $2.99 elsewhere. It’s your decision.