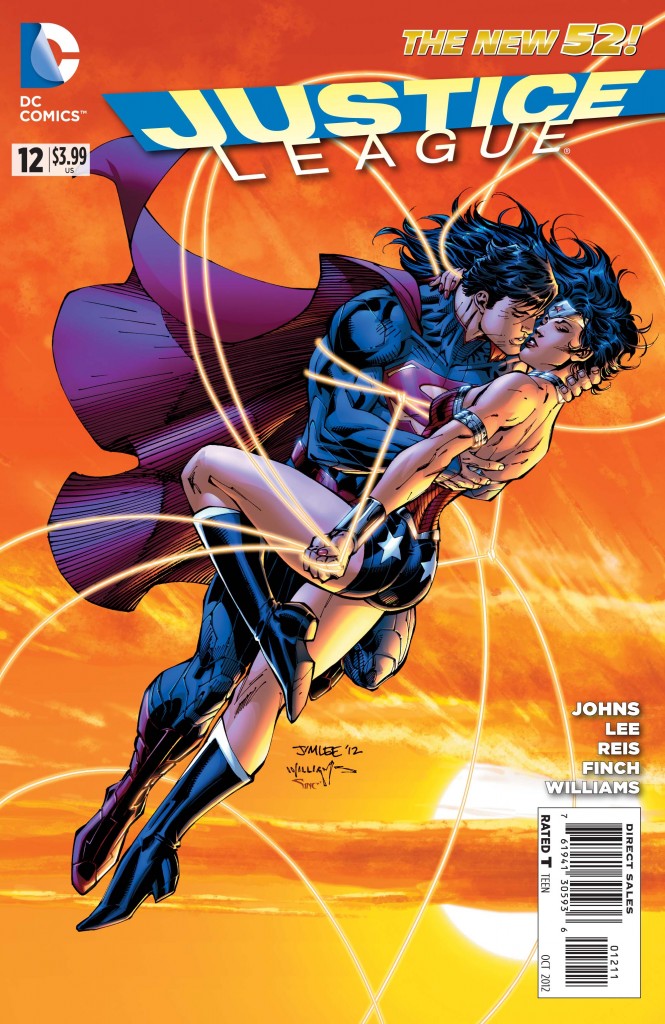 The cover of Justice League #12 became a hot topic this week as major media outlets who usually ignore the world of comics reported on the issue’s headline making cover.  The front of the book features a gorgeous sunset orange background, upon which there is a beautifully rendered Jim Lee drawing of Superman and Wonder Woman sharing a passionate kiss. The decision to feature this image was a brilliant marketing move by DC, but those looking for an issue filled with torrid romance will be sorely disappointed. The fact is that, Justice League #12  is not really about Wonder Woman and Superman smooching, but it is a solid piece of storytelling about a group of heroes coming to grips with the fatal flaws they live with everyday.

Those readers who have used this moment to jump on the book will also find themselves at a loss. Justice League #12 is in fact the end, and an excellent one, to the Villain’s Journey arc. It features some of the strongest character moments of the series and sets up some potentially blockbuster moments to come.  It’s too early to say that this marks a return to form for writer Geoff Johns, mostly because I’ve said that a few times about this book, but it’s the kind of storytelling I’ve been looking for since the series began almost a year ago.

Johns is a master at breaking down heroes from the inside out, taking their strengths and making them weaknesses, thus giving the reader a tangible thread with which to connect to these modern day gods.  In the first arc, Origin, he seemed to forgo this tactic for a simple battle book and the result was something less than stellar. The Villains Journey, while still having its ups and downs, seems to be a return to the writer’s wheel house.  This story in particular delivers several moments of our heroes laid bare and it does wonders to pull us closer to them as people. Whether or not this is worth 12 issues of investment is up to the individual, but my continued faith in Johns leads me to keep hope alive for the future.

So, what of the the buzzed about cover image? Well, I can assure you that this isn’t a tease, the moment itself is tender with a note of sadness that gives it a sense of reality I didn’t expect. A big part of me wishes it hadn’t been given away right on the front cover, because the fact that it ends with a kiss should have been a holy crap kind of event, but instead I was waiting for it.  Lack of dramatic tension aside I think the idea of Superman and Wonder Woman makes sense in the set of circumstances Johns has set up. They are two lost souls, both from very foreign lands, that share an intense sense of loneliness.  Diana because she is still learning how to love and Clark because he is always forced to lie to protect his secret identity. So, if you are worried it will feel like a stunt, it doesn’t, but it will be the kiss’ impact on the issues to come that will really define its worth.

The kiss and everything around it is once again brought to life wonderfully by Jim Lee. The book is, in no uncertain terms, gorgeous, and although it sometimes relies to heavily on splash pages, I often find myself entranced by the bravado of it all. In issue #12 Lee is also asked to breath life into a few smaller moments and he nails them. The scene between Wonder Woman and Steve Trevor is dripping with pain of desperation and you can see it in the faces of the characters as much as you can feel it in the writing. Then there is my favorite scene, a meeting of the League on the Watchtower. It should be a moment of victory, but instead it’s a crucible of turmoil. It’s in this scene that Hal Jordan, both in speech and in appearance steps up, and you can actually see the moment of revelation in his face when he comes to a rather giant decision.

Justice League #12 is a step in the right direction for the series, but despite its attention grabbing cover art it is not a place for new readers to jump on. Geoff Johns ends his current arc nicely and also begins to give real depth and shade to his large cast of characters. The Superman and Wonder Woman scene will be very effective for those who have been keeping up with the book, but it’s only a small part of a larger whole. If Geoff Johns and Jim Lee can keep up this kind of quality for three or four straight issues Justice League will move from the back of my to read pile right up to the front.