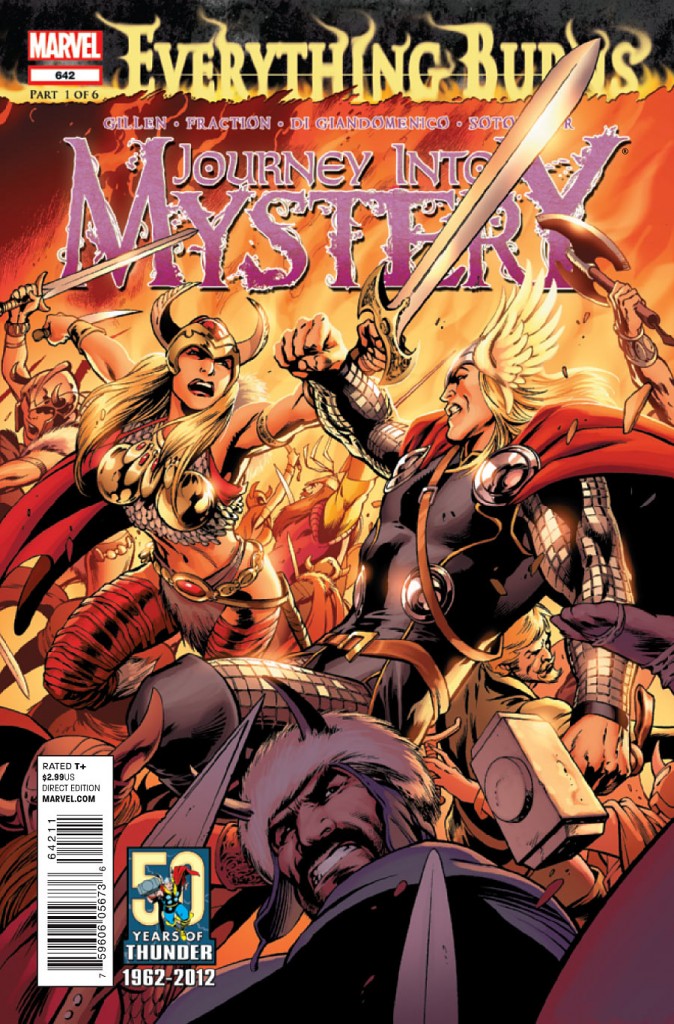 Everything Burns Part 1 of 6

Thunder and lighting erupt within the skies of Asgardia and it’s up to Thor and Loki to assemble the warriors of their realm to fight for their ethereal paradise. Kid Loki, forever causing mischief, is responsible for releasing Surtur: Lord of Muspelheim, Destroyer, Great Devourer, A Villain. And though it was with Loki’s best of intentions for everyone among the Nine Realms, to do so has turned out to be a huge mistake. Meanwhile, Queen Freyja of Vanaheim sits atop a gnarled throne on the throws of making a most grave alliance that will set The World Tree ablaze, offsetting what’s left of the balance within all the kingdoms. There’s more, but I think you get the idea. There are some heavy dealing going down in the pages of Journey Into Mystery #642.

For me, the joy of reading  Journey Into Mystery is that it feels as if I’m reading something cosmic within a world of gods and magic. The scope of this series is huge and the planning of the arcs contained within it have been consistently impressive and, more importantly, comprehensive. I’m not always one to enjoy comic books where a large portion of the reading is steeped within the realm of politics. For one reason or another I just can’t lose myself in that department of comic book writing. However, in the case of  Journey Into Mystery #642, not only is the plot meticulously laid out but there’s even a page located at the beginning of the book that tells you who everyone is and what their function is within the kingdoms. As someone who is a bit of a space case from time to time, and who reads an absurd amount of different comic books each and every week, this is a godsend.

Journey Into Mystery #642 is sure to entertain any fan of the series and new readers, while maybe being a little confused at first, won’t be able to deny that this arc is going to be epic. This is just the beginning of a crisis within the Nine Realms and already we’ve got unlikely alliances, the clanging of metal on steel, magic, and a sickeningly tender moment between two brothers. For real, I loved that bit of dialogue shared between Thor and Loki as the reality of Loki’s mistakes truly began to dawn. If you’re looking for a heavy action book with moments of pure heart than Journey Into Mystery should be added to your pull list.

VERDICT: Buy it. Do you like Thor? Do you like epic battles, magic, and trickery? Of course you do! Seriously, Journey Into Mystery in my estimation is a fantastic series and it’s one that you should be reading. This is about as good of a jumping on point as you’re going to get for at least the next couple of issues so I would advise that you pick this up and get in on this series as soon as possible. You won’t regret it.