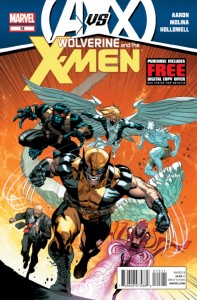 This week, Wolverine and the X-Men AND the Avengers “enjoy” some downtime at the Jean Grey School for Higher Learning!!! Finally, Jason Aaron brings his story back around to the gifted youngsters roaming the grounds of Wolverine’s school, returning to the inter-character drama that made Wolverine & The X-Men a must-read series before this whole Avengers Vs. X-Men debacle took over. Issue #15 is a visually appealing, downtempo tie-in issue that anticipates some all-out, wall-to-wall, superheroic brawling in the next Avengers Vs. X-Men issues.

Somewhere between AvX #10 and this issue of Wolverine & The X-Men, the Avengers have retreated from K’Un L’Un and are hiding out in the basement of the Jean Grey School, the mutants that were being mind-controlled by Emma “Phoenix” Frost are now refugees acclimating to life in the Jean Grey School, and my greatest fears have come to fruition: The Avengers and the X-Men are teaming up to take on the Phoenix-controlled Cyclops and Emma Frost. If Wolverine yells “AVENGERS ASSEMBLE!” during the next issue of Avengers Vs. X-Men, I’m going to crumble a cookie in my fist or step on some bubble wrap that my little cousin wanted to play with (or something else equally non-violently aggressive). I’m over it. I am. Let’s just finish this AvX character demolition project and move on.

Despite having to tie this issue into the aforementioned AvX non-starter, Jason Aaron thankfully imbues the story within with wit, character development, and some romance. Aaron loves the characters in his Wolverine & The X-Men mythos, and he especially excels when he’s manipulating the plot-threads and character arcs that he created prior to the string of AvX tie-ins. Aaron touches on several storylines in this issue: Hope and Wolverine have a heart-to-heart, the aforementioned Avengers (and Abigail Brand of S.W.O.R.D.) struggle to devise an attack plan, Rachel Grey and Professor Xavier debate Cyclops’ potential for salvation, Quentin Quire makes some funnies, Kid Gladiator and Gladiator have a heart-to-heart, Angel graduates, Iceman and Wolverine have a heart-to-heart, Idie and Hope have a heart-to-heart (and eat ice cream!), and, finally, Beast and Xavier strut off toward battle alongside Wolverine, Iceman, Rachel Grey, and Angel (an implied, nearly-successful riff on the Original X-Men line-up).

One highlight is little Broo’s involvement in cracking the Phoenix dilemma for a flummoxed Tony Stark. It’s a laugh-out loud moment that showcases Aaron’s humor as well as gives little Broo a natural character beat that progresses his role in the series. The best moment of the entire issue, however, is a two-page sequence featuring Paige “Husk” Guthrie and Mortimer “Toad” Toynbee as they have a charming jaunt through the tunnels underneath the school. It’s a beautiful scene, and it plays on Aaron’s long-simmering plot threads of Toad’s crush on Paige as well as Paige’s own self-esteem struggles. I never thought we’d see Toad the Janitor happy again.

One plot point that I’m still struggling to get behind is the budding relationship between Kitty Pryde and Iceman. I’m too fond of the Claremont Kitty/Peter stuff and especially fond of the Whedon Kitty/Peter stuff to truly support this Ice-Cat ‘ship just yet. I get that Peter was all Phoenixed up last time they spoke, but maybe he really needs Kitty now, and she shouldn’t be getting so cozy with Iceman right now! Doesn’t Bobby see that she’s on the rebound! This won’t end well…

Jorge Molina continues his artwork run on the series. His precise linework is reminiscent of Steve McNiven’s—a comparison aided by Morry “I Colored McNiven’s Work on Civil War” Hollowell’s spectacular coloring. Molina’s characters are emotive, and he expertly captures the quiet and/or tense conversations happening all about the school grounds in this issue. The only thing some may find distracting with Molina’s work is his cartoon-inspired facial construction. The rest of his figure work is incredibly naturalistic, and yet his facial work is comparable to Nick Bradshaw’s stylized, anime-inspired designs. It’s not really that big of an issue, especially if you’re a fan of Bradshaw’s work, but it might be a jarring combination for some readers.

Finally, it seems as though Jason Aaron can bring his Wolverine & The X-Men series back to its former glory. While I was still bothered by some of the AvX-related developments in this issue (X-Avengers), Aaron’s writing and Molina’s artwork told a story that felt less like a tie-in and more like a forward progression for our merry band of mutants. And Broo is just too damn adorable. And the Hellfire brats are returning next issue! Buy it. Before the Phoenix Vs. Avengers madness begins.