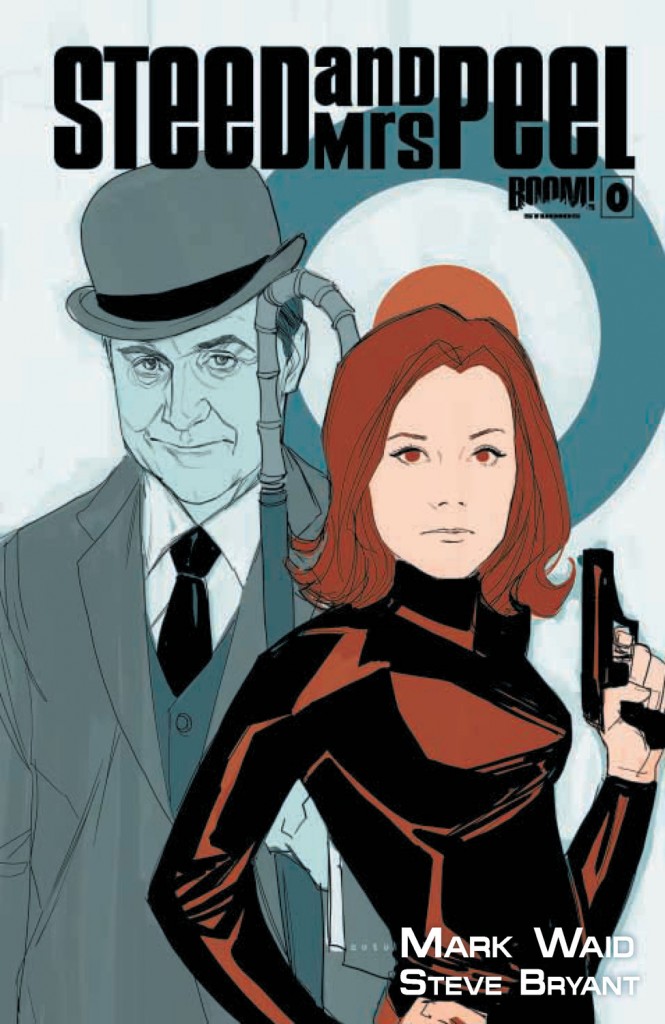 One of the 196os’ most original television series has made it back onto comics pages with the Boom Studios release of the Mark Waid and Steve Bryant book, Steed and Mrs. Peel #0, precursor to an on-going series based, of course, on the British television classic, “The Avengers”.

As with any of the re-visits of older properties, or ones derived from other media, the most important things are to retain the original’s spirit and intent, and that the characters remain on-model and true to their essential elements, or why bother in the first instance? An additional road-block to success on this project lies in the difficulty of capturing the special chemistry between Emma Peel and John Steed, which began on script pages but found full expression in the wonderful performances of Diana Rigg and Patrick Macnee.

As a huge fan of “The Avengers”, and particularly the two seasons of Emma Peel episodes, having encountered them in their original American network broadcasts (more on this later!), I approached this new series with much wariness, despite my fondness for Mark Waid’s work both past and present. For the most part, this is a seamless translation of a television program that in the wrong hands would have been a caricature; the already highly-stylized Steed and Mrs. Peel need to be handled delicately to avoid falling into empty, and unwanted parody.

Mark Waid has navigated this mine-field brilliantly, from his bravura “pre-credit” sequence, through a charming finale that calls up the emotion of the final Emma Peel episode “The Forget-me-knot”. There are a goodly number of moments that simply scream “Avengers” at me, with witty banter and diabolical masterminds, but most importantly, Mr. Waid has told a clever spy story that would have made an excellent “Avengers” television episode in 1966; on such a project as this, no higher praise can be given.

Here-in, we re-visit “The Hellfire Club”, from writer/producer Brian Clemens’ wonderful “A Touch of Brimstone” episode that featured the iconic moment of Mrs. Peel as the club’s “Queen of Sin”. (For you X-Men fans, Chris Claremont and John Byrne “borrowed” elements of this episode whilst creating their “Hellfire Club” and it’s Black and White Queens, so be aware, there’s no Emma Frost without Emma Peel!) The Club is up to some new tricks involving the destruction of British Intelligence, as well as plotting revenge against Steed and Mrs. Peel for their thwarting of the Club’s aims last go-round. I’ll not spoil the pleasures of discovery with a wholly inadequate blow-by-blow description, but suffice it to say, Mr. Waid’s script ticks all the right boxes in creating a very satisfying adventure, and one that stays true to the show’s signature off-beat quality.

The art by Steve Bryant, done in a very spare 1960s’ style is interesting, with most of the lead characters’ likenesses accurately portrayed. However, one of the myriad charms of the original show was the set decoration within the various locales our heroes visited, and that is generally lacking here; it’s no deal-breaker, but a bit more background work, and some attention to “dressing the sets” would help to sell the idea of “Avengersland”, the quirky England of the Diana Rigg episodes that still lingers within the minds of those of us who love this program.

Steed and Mrs. Peel could have been just another wreck cast up on the reef of good-intentioned, but badly-done adaptations, but instead, in the capable hands of writer Mark Waid and artist Steve Bryant, it is a charming tribute, and a wonderful addition to the legacy of “The Avengers”.

VERDICT:  If you’re at all a fan of “The Avengers”, this is a fun “must-read”. If you’ve never encountered Emma Peel and John Steed before, may I humbly suggest viewing the episodes “A Touch of Brimstone”, “The Cybernauts”, “Death at Bargain Prices” or “Town of No Return” before reading, just to fix the characters in your mind’s eye and ear!

There was an actual Hellfire Club that began in 18th Century England, who engaged in… shall we say, prankish and questionable activities?

Steed and Mrs. Peel was released with 8 different covers, two of which are X-Men homages!

Hanging on my wall is a plaque containing a production still from the American “chessboard” opening of “The Avengers” television show, and mounted within are signatures of Patrick Macnee and Diana Rigg.

Ps) I’ve had a crush on the aforementioned Ms. Rigg since first seeing “The Avengers” in 1966, and which frankly has not abated over all these years. rrr