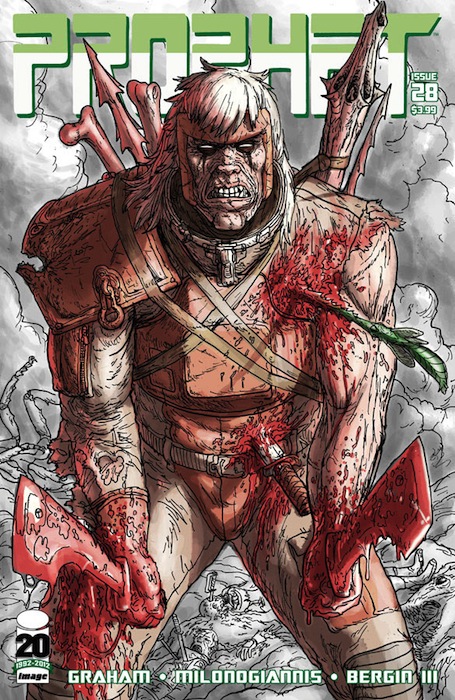 Prophet #28 gives us the most direct narrative yet. The issue picks back up with the old John Prophet and Hyonhoiagn, his plant companion, on the search for the missing pieces of Diehard. We’ve apparently skipped ahead a bit since they’ve already found a good number of his components, and his mind is guiding the ship to the final pieces.

In a way, this issue is mostly setup, an opportunity to show Diehard being assembled for what will be the journey that follows. It’s nice to see it finally happen, and not be spread out over innumerable pages, but to be honest, this issue felt a bit light compared to previous ones. Additionally, Diehard, in addition to being mute, is a cipher. We’re given a sense of the other two characters, but I was hoping for more insight into this far future version of Diehard and how he operates. Hopefully that’s coming.

One of the nice things about the series so far is that things are starting to establish themselves. When Prophet and Hyonhoiagn arrive at their destination where everyone wears a (controlling) dolmantle, we recognize them from when another Prophet wore one issues back. Likewise, we’ve seen the Qid-Pid before.

What the issue does have is the same exciting mix of ideas that I’ve come to expect from Prophet. The Cetacea life ship, Hyonhoiagn burning his limbs with fire water to forget, the cubed egg cage and its secret. Unfortunately, in this issue, these seem to overwhelm actual story development. Since it’s Prophet, though, I’ll forgive a slightly tepid issue, especially since I still consider it one of the best series around.

Milonogiannis continues the art here, using the same style as the previous issue. It’s good, but I find some of his pencils muddier than I might want. Diehard, for example, never really comes together for me, and since this issue focuses on him, I wanted him to. There is a splash, however, where Prophet opens his mind to the universe, that is simply gorgeous.

Despite some reservations about depth of the story in this issue, Prophet continues to be one of my current favorite titles. And while it seemed to start in a kind of tractionless exploration, it’s now gaining momentum and moving toward…something. This issue clearly sets up what’s to come and I’m looking forward to that. I still heartily recommend Prophet, though I would start a little further back in the relaunch if you’re just starting.