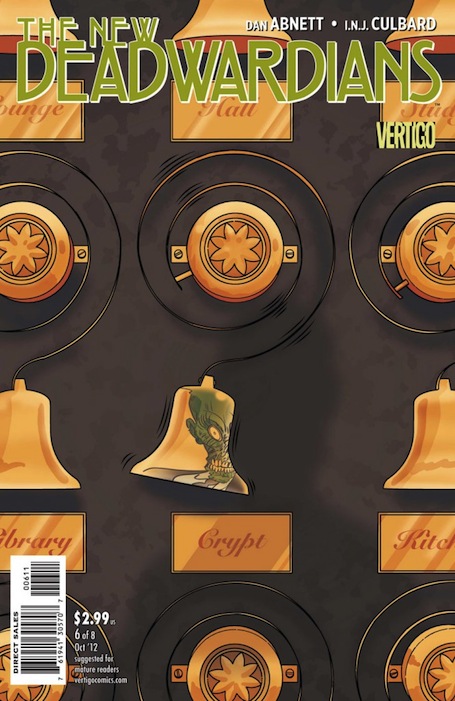 We’re now six issues into New Deadwardians, with only two issues to go in this miniseries, and I still don’t know what’s going on. I can’t decide if that’s a good thing or a bad thing. We pick up with Detective Suttle recapping his visit to see the Hinchcliffe family with Constable Bowes. He brings up the possibility that Hinchcliffe didn’t really die, and that he sacrificed and took the place of his son (to whom he bore a startling resemblance). It’s an interesting theory, but not one that seems borne out by the facts of this world.

Suttle and Bowes then get up to investigating the artist, Pretendleby. Pretendleby isn’t there, but some of his art is, as well as a notebook bearing the mysterious symbol that has been popping up all series. On the way out, Suttle runs into Sapphire, the prostitute, who diverts Suttle for a while (though in the best way possible). She turns him on to a poet called Salt, one of Pretendleby’s associates. Of course, on pursuing him, Suttle runs into trouble.

This felt like more of an introspective issue. We start with Suttle contemplating magic, then move on to Suttle fighting against his dead nature, indulging in feelings of being alive again (courtsey of Ms. Sapphire). Even Salt philosophizes about the nature of the world and how the Young fit into it. There’s nothing wrong with this, of course. One of the interesting things about New Deadwardians is the world that Abnett and Culbard have created here. I’d love to see it explored in more detail – how the Young feel, how this continues to intersect with Edwardian England. However, I want to figure out this mystery. And there are only two more issues to go.

This, of course, means that Abnett has done his job, creating a compelling puzzle and interesting suspects all within a fascinating world. I only hope that the solution at the end lives up to all the anticipation. Call me an optimist, but I am guessing it will.

Despite its introspective nature, this is a key issue in the overall storyline which has, so far, been brilliant. If anything, I wish this were an ongoing so I wouldn’t have the anxiety of hoping that everything wraps up in a satisfying manner. Pick it up if you’ve been reading, and if not, I’d recommend the first issue to see if it’s your kind of thing. Me, I’m in it for the long haul.