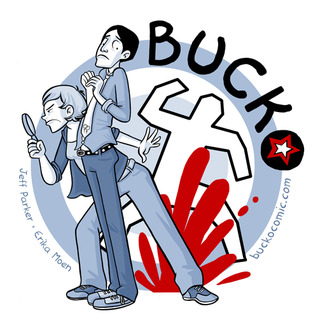 Lately I’ve fallen in love with web comics. I spend so much time on my computer that every now and again I need tot ake a break from what I’m doing to just enjoy something awesome. Bucko is a web comic done by Jeff Parker and Erika Moen. I didn’t get a chance to read this while it was being published online, but Parker and Moen just finished putting together a physical copy of their web series that’s set to hit store shelves on September 19 thanks to Dark Horse Comics.

Bucko revolves around a character named Rich, who mostly goes by the nickname Bucko. Unlike many web comics that take place over a long period of time, this story takes place over the course of a few days in Bucko’s life. We meet a wide variety of characters, who are nothing short of original and fun and I think partially based on people that both Parker and Moen know (including themselves).

Bucko’s endearing hilarity kept me laughing the whole way through and ensured me many looks at the times when I couldn’t contain my laughter while on a flight. I didn’t expect to enjoy this comic as much as I did and now that I’ve made it through, I’m left wishing that there were more to come.

While I loved the comic itself with Parker’s witty and sharp humour and Moen’s beautiful and fun art style, quite possibly the best part of the whole thing was the co-creators commentary included at the bottom of each page. These two are hilarious and their banter made it seem like working on this comic was a ton of fun.

VERDICT
I highly recommend Bucko. This comic can be picked up for under $20 and it’s worth every penny. I had a lot of fun reading it and if Bucko doesn’t make you smile at least half a dozen times, you’re dead inside.