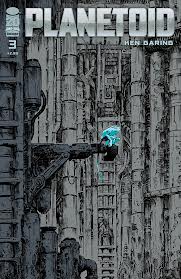 Silas’ adventures continue on the unknown Planetoid of issue three of this new series by Ken Garing. Last issue, Silas had defeated the three Rovers who were about to ambush and slaughter the group of people. In this issue, Silas has become the leader not only of this tribe but other tribes who live on the planetoid and are trying to survive.

At first the tribes bicker with each other as Silas begins to work on the huge ship that resides behind where the tribes live. Onica tells Silas that he needs to stop the bickering, and after resisting the task, Silas calls on the tribes to work together and he begins to train all of them. Out of all the tribes, there’s one dissenter who doesn’t agree with working together and so he leaves.

Last time when I reviewed issue two, I stated that I hadn’t read the first issue. I was able to and that really helped me understand the story even more. This series has become a new favorite of mine and I’m looking forward to what Garing has in store for it. I’m enjoying his artwork and how he uniquely depicts his characters both in word and illustration.

Verdict:
All I have to say is buy this book. The sky isn’t the limit on what this series has in store for readers, the universe is.