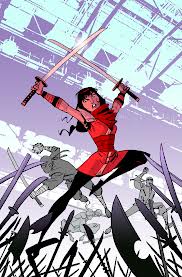 Our turtles in a half shell are back in this new issue by IDW and things are about to get more interesting for this family. Last issue, the four brothers along with Casey and the Purple Dragons rescued Master Splinter from the hands of the Foot and had a showdown with the Shredder. In this issue, we see the aftermath of that battle.

The story opens with the turtles back at April’s place trying to relax and also worrying about their father as he has been rather grumpy from his meeting with his old nemesis.  Casey bursts in all bruised and bloodied from his latest encounter with his drunken father (to read more about that, read Teenage Mutant Ninja Turtles Micro-Series #6 Casey).  At the sight of his wounded friend, Ralph angerliy runs off to have a showdown with Casey’s father. Splinter goes after him and warns the others not to follow.

Meanwhile, back at the villians’ hangout, Shredder and Karai have a ninja family heart to heart and we learn how the Shredder returned to the present time. Somewhere else, Baxter awakens to find he’s not in Kansas anymore, and gets formally introduced to Krang’s family. Back in New York, Ralph arrives at Casey’s home and confronts Casey’s dad, but just as he’s about to strike the final blow, Splinter arrives and is about to show his son the true way of the ninja, which makes for a climatic ending!

Verdict:
This was an excellent issue as the theme of the book was all about family and conflict. There’s the turtles and their father, Shredder and Karai, Krang and his family, and then we end up with Ralph and Splinter. It’s also interesting to note that Splinter had to deal with his anger in the past and now in the present his son has to deal with the same thing. The creative team of Eastman, Waltz, Kuhn, Pattison, and Lee had done and continue to do an amazing job with this series. I’m looking forward to the next issue and what’s to come down the road for the turtles.