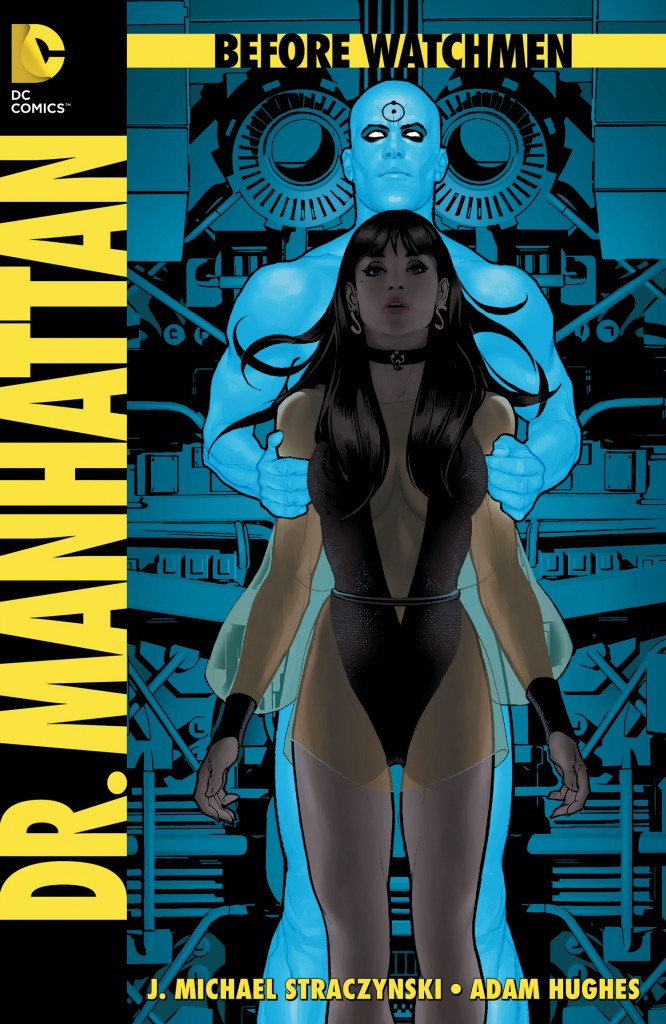 Time is nothing to the being formerly known as Jon Osterman. Words like past, present and future are concepts below a figure that can slip his consciousness from one end of his existence to another and so there would seem to be a certain level of irony in calling a book featuring him Before Watchmen.  The character would also seem an odd choice for a prequel story since so much of his life, pre and post change, was explored in Alan Moore’s original work. These concepts, mixed with the declining quality of the series as a whole, bread in me a certain level of malaise about the very idea of Before Watchmen: Dr. Manhattan #1, but I’m thrilled to say that I was flat out wrong in my negativity.

J. Michael Straczynski pulls a rabbit out of a hat here by doing something that no other writer on these books, and that includes Mr. Straczynski himself, has been able to do and that’s manage to make the prose feel as if Alan Moore could have penned it himself. There is a sense of quiet intelligence about Before Watchmen: Dr. Manhattan #1 that permeates every page and panel and then reaches out to the reader and draws them in like snake charmer luring in a wayward cobra.  JMS could have easily turned to a more lurid story about the big blue naked superman, but instead he has crafted something that feels like it fits in perfectly with the Watchmen mythos.

In the fourth chapter of the original Watchmen series,entitled Watchmaker, we are exposed to not only the origins of Dr. Manhattan, but the way in which his mind works and then in chapter nine, The Darkness of Mere Being, we experience his revelation that life, from which he has become so detached, is in fact worth saving. These are two of the most intense sections of the original work and yet they are sequences in which very little action occurs. JMS creates an amalgam of these two stories here, as he retains the “Now I’m” time jumping structure of chapter 4 while dealing with the “searching for meaning” thematic aspects of chapter 9. This is a story about a being that thinks of every eventuality and who could kill you with a thought, so punches and kicks are replaced with philosophical musings.  The best part about Dr. Manhattan is that it feels as if there is a genuine character reason for it to exist as it takes Jon into territory he has not yet encountered. I think the possibilities behind this destination are fascinating and I look forward to seeing if JMS can execute on them.

Adam Hughes also manages to expertly walk the tight rope between executing on his own style yet still paying homage to the look and feel of Dave Gibbons original creation. It is no surprise that Hughes’ art is gorgeous, his covers have been wowing me for a while, but it is quite impressive that he can keep up his excellence throughout a full length book. Much like JMS’s writing, Hughes manages to create a stately and intelligent feel to our main character, but he also does a fantastic job of showcasing Jon’s incredible powers. The moment in which Dr. Manhattan decides to take a certain action is a blinding page of blue that I would hang on my wall in a second.

The idea of a Dr. Manhattan story didn’t excite me, J. Michael Straczynski’s try at Nite Owl turned me off, but much to my surprise I’m whole heartedly recommending this book to you all. JMS has done what none of the other writers have managed to do and thats to capture the voice of the Alan Moore creation perfectly. The introduction to the book surfs familiar territory, but its big reveal is one that could, potentially, take the character in a very cool place. Adam Hughes does great work that captures both the stateliness and power of Dr. Manhattan.  This a stellar book and it gives me one last hope that the whole Before Watchmen expedition can produce something excellent instead of just mediocre.