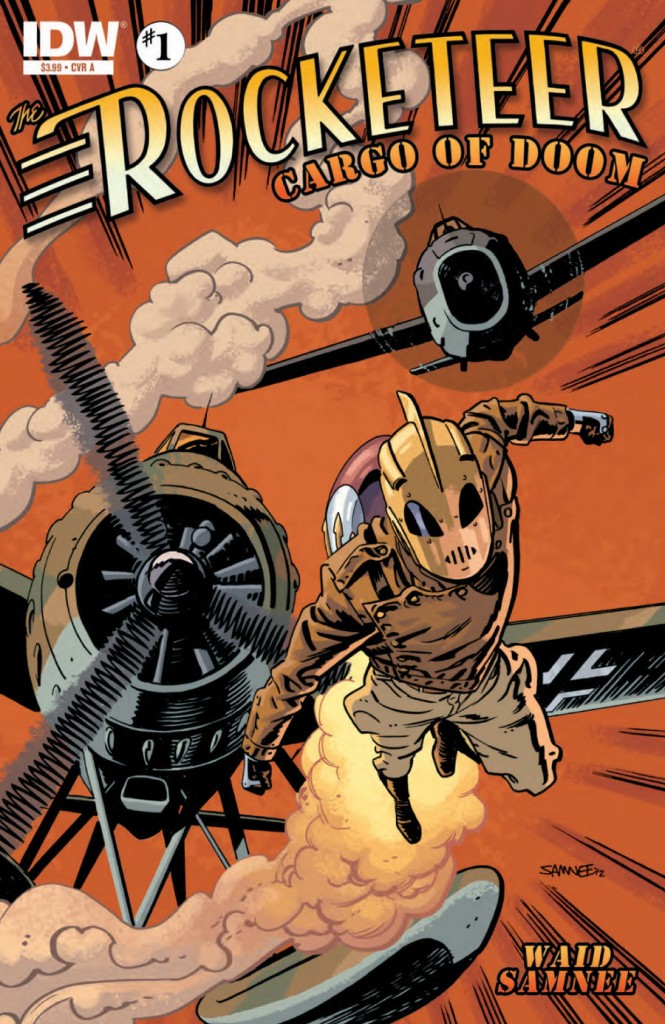 Although the two recent Rocketeer anthology mini-series were quite a bit of fun, and a welcome re-visit to the “Rocketeer” universe, this newest project featuring Dave Stevens’ signature character, as written by Mark Waid and illustrated by Chris Samnee, is a simply wonderful book, filled with high-flying adventure, well in keeping with the original book’s spirit, tone, and tenor. Mr. Waid captures all the quirks that made Cliff Secord (The Rocketeer, in case you’ve forgotten!) such a genuinely likable character; slightly clueless, particularly about women, but always striving to do right by everyone. Our other old friends are back as well; aviation engineer and mechanic “Peevy” Peabody, and of course, Cliff’s beauteous on-and-off girlfriend, Betty. We’re also introduced to Peevy’s niece Sally, an aspiring pilot in her own right, who is developing quite a crush on our Mr. Secord, much to the consternation of her uncle…and Betty!

The initial plot threads emerge aboard a ship entering Los Angeles harbor carrying a mysterious cargo, as well as it’s guardian, the now mind-altered Werner Guptmann, making a re-appearance from the first series. This mostly un-seen freight is destined for the “Master”, whose plans are as yet un-hinted at, but will soon involve our hero, as the book ends on an ominous note. (The ship bears quite a resemblance to the Venture, from the 1933 “King Kong”, a deduction borne out by a scrap of dialogue!)

As entertaining as the story is, any book entitled “The Rocketeer”, due to the incredible art by it’s creator Dave Stevens, is going to rise or fall based on the way it looks on the page. The choice of artist Chris Samnee was absolutely inspired. Rather than choosing a penciller to attempt a pale imitation of Mr. Stevens’ work, Mr. Samnee approaches The Rocketeer with a period-appropriate style evocative of Alex Toth that strikes the perfect balance of fun-loving and serious, and his uses of shadows in the “mystery” sequences are masterful. I can’t go on without mentioning the coloring by Jordie Bellaire, that beautifully enhances the art, and which is crucial in setting the various moods, and additionally, the usage of some old-school SFX  by letterer Shawn Lee brings us back to an earlier era of comics, and completes the very satisfying package; top marks to all involved!

Concluding, as a huge fan of The Rocketeer and Dave Stevens, although I enjoyed the recent minis, I had major qualms regarding any sort of longer-form book, and the ability of any creator to inhabit the spirit of this very personal work for more than just a glimpse backwards nostalgically. Nothing can match the Dave Stevens original, but my trepidations were totally alleviated by the care and obvious effort that these talented creators exerted to produce such a glorious homage to one of comics’ most unique characters, as well as it’s under-appreciated artist and writer.

VERDICT:  This is the type of book that I’m forever championing; “adult” without being crass, old-time heroic without seeming kitschy, just a superior comic book for all ages, and a marvelous addendum to The Rocketeer canon, and a fine jumping-on point for those who have only seen the film.

NEWS: It seems as if Chris Samnee will be taking over the artistic reins on Daredevil in the very near future, so congratulations to him!

Brush with Passion: The Life and Art of Dave Stevens (Underwood)

(Humbly submitted for your approval, and available right here at Talking Comics at no cost to you, a previous piece by your obedient servant entitled “Remembering the Real Rocketeer: Appreciating Dave Stevens”  rrr)