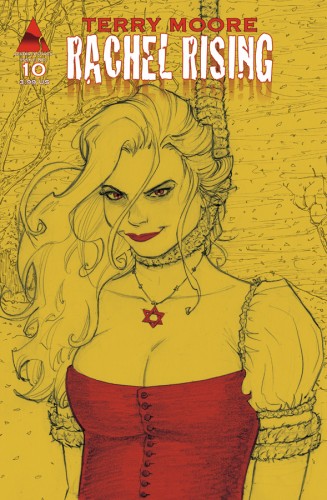 Terry Moore continues to thrill in his tenth issue of Rachel Rising. This particular series has had strong issue after strong issue, and the latest issue does not disappoint.

The previous issue brought forward a more mythological aspect to the story. Up until that point, we just had a faint sense of what was happening to the women. For the most part, Rachel and Jet’s condition is still a mystery, but the reveal of the blonde woman’s identity and her power hints at a connection to their death-like condition. Issue 10 solidifies this connection, with a face-to-face meeting and an interesting reveal of the woman’s identity at the site of Rachel’s emersion from her grave.

Let’s not forget Aunt Johnny and Zoe, both now in the hospital. Johnny is surprised by Jet’s condition, but she doesn’t let it phase her. Of all the characters in this series, Johnny is one of my favorites. I wish I had a real Aunt Johnny who lived down the street from me. Moore created a great, down-to-earth woman who I am excited to see on the page. Rachel and Jet also spot Zoe, who had died and been brought back by the ER staff. There is still a lot to learn about Zoe, and we can’t count her out of the picture yet.

As a whole, this series is spectacular. It is thoughtful, creepy, and has some of the most original female characters I’ve seen. The art is fantastic, and each issue is a keeper.

Buy it. It may not make sense to new readers, but the series is so original and beautiful that it needs the financial support and talk to keep it going through the whole series. Terry Moore is a strong writer and an excellent artist, and the covers are just plain gorgeous.