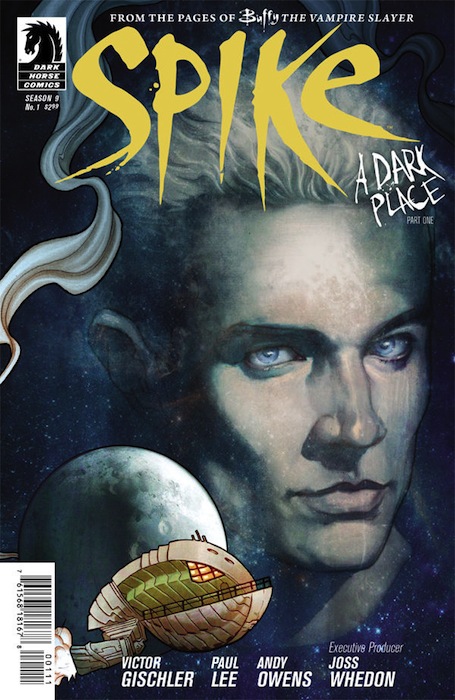 I’ll be honest, I haven’t quite kept up with the Buffy Universe that’s been continued in the comics. It seems a bit daunting, all that content. But I occasionally get a bit nostalgic for the old Sunnydale gang, so when I saw that Dark Horse was releasing a Spike miniseries, I was intrigued. When I read that it would take place aboard Spike’s spaceship with a crew full of insect aliens, I knew I had to check it out.

For those also a little rusty with the Buffyverse, there’s not a lot you need to know to pick this up. Once again, Spike’s orbit has intersected with Buffy’s. Once more, he’s left alone and hating it. Only this time he has the aforementioned spaceship and the insect alien crew which follows his orders. The crew, worried that Spike is descending into a dark depression, takes him to the moon where he can, for the first time, experience the sun.

Of course the moon isn’t as uninhabited as one might think. First a frog creature attacks, then other creatures invade and take over the spaceship. Who or what these creatures are is yet to be seen. And I have a feeling it will connect back to what’s going on on Earth.

The good news is that Spike sounds like Spike, something important for a title character. I have to admit to being worried it would be overloaded with British slang (it takes a steady hand). The bad news is that this issue is mostly set-up. It recaps where Spike is coming from, sets up the situation. This is helpful for people, like me, who are coming into this without reading everything leading up to it, but I feel like more could have happened in this issue.

My other problem is that the humor seems a bit too slapstick for my tastes. Buffy the Vampire Slayer was always a funny show, but the humor seemed clever. Here, it’s mostly bumbling aliens. I would hope for something smarter in future issues.

If you’ve been keeping current on all the developments in Dark Horse’s Buffyverse comics, or if you’re a Spike fan, you’ll want to pick up Spike #1. It shines a spotlight on everyone’s favorite blonde vampire. If you’re not, though, I would give it some thought. This issue is mostly set-up and it’s unclear whether subsequent issues will pick up the pace. I’m intrigued enough to check out the next issue, but your mileage may vary.