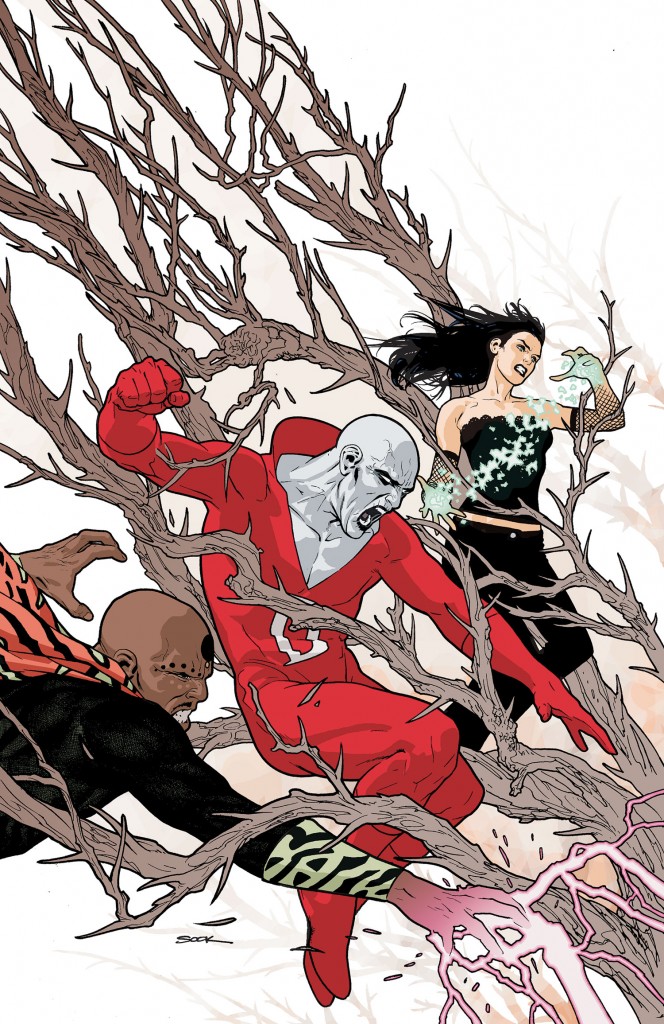 I may be in over my head here.

For several weeks now, each issue has brought forth a new player to the JLD team. Long-time DC magic universe readers may recognize each character, but for new readers like me, the significance is lost.

Take issue #12, for example. We get a brief look at Dr. Mist’s background, enough to learn motivation for his recent betrayal. Then there’s Timothy, who’s history I only picked up on when someone pointed it out to me, Dr. Occult, and that mysterious black figure who smokes and knows Constantine (I assume other people may know him—I have no idea who he is!). I’m sure older readers and those familiar with the backgrounds of the various magical characters of DC are pumped to see returning characters, but it is frustrating for new readers to try to keep everyone straight in their heads without actually knowing if they are important characters. Maybe I’m just complaining because I’m used to knowing most of the big picture. Who knows—I may be experiencing the world from a brand-new reader’s perspective before the New 52 was launched.

When I get past my character confusion, issue #12 is a solid issue. Now that Faust and Dr. Mist have the map and the key, the heroes seem to be at the end of their rope trying to keep the Books of Magic from falling into the wrong hands. On top of that, Timothy, who seemed to be the best chance of obtaining the books and using them responsibly, has cast all magic out of his body. The fight looks pretty bleak, especially when Blackbriar Thorn and Black Boris (two more character I have no idea about!) stand in the way of the Justice League Dark.

One awesome thing about this issue is the dialogue between the characters. Even though Zatanna and Orchid kept getting hit on, I appreciate how the characters are developing as a team. The girls don’t take the guys’ advances seriously, and the guys joke around more than anything. They are all still getting a feel for working with each other, so they still have some work to do. The relationship between Constantine and Zatanna will be explored in the Zero issue (yes!)

If you are like me and are not familiar with the magical aspect, this series may be overwhelming at times. However, if you are ambitious, I’d go ahead a recommend this issue and the series. The #0 and #13 may or may not be good jumping on points, so you might as well buy this one and try to keep your head above water. The series has immense potential, and I can’t wait to see what Lemire has in store.