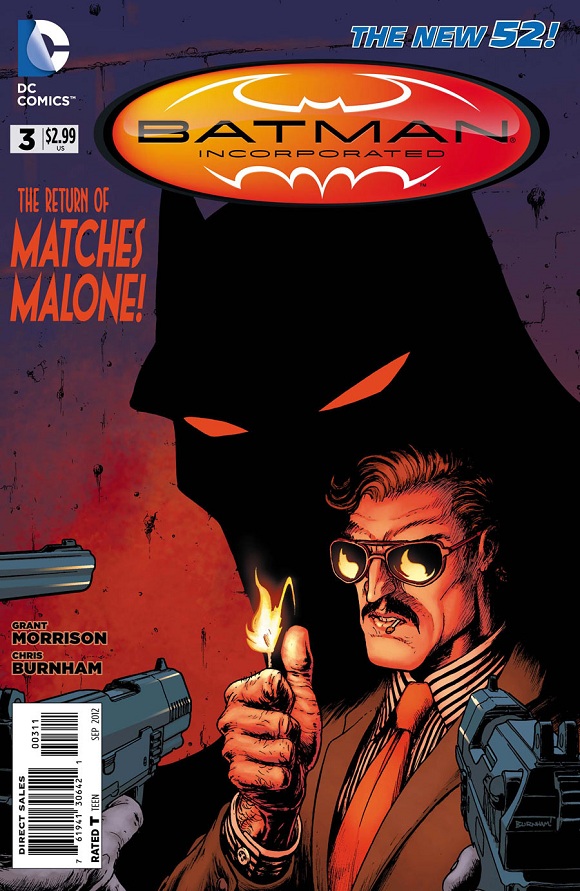 Oh, Grant Morrison. My relationship with Grant’s is very much love/hate. There are no stories that I think are ok by him. It’s either stellar or too over conceptualized to make sense. Luckily, his work on Batman has delivered more times than not. Batman Incorporated has been a title that I have thoroughly enjoyed reading from its inception. At first it was simply because I knew it kept Dick as Batman, but then I realized I genuinely liked everything it was doing.

Batman INC #3 brings back one of my favorite characters in comics, Matches Malone, and it is glorious. If Joe Pesci could infiltrate Bruce Wayne’s mind, then the resulting being would be Matches Malone. He’s stereotype Jersey boy meets streetwise petty criminal. Everything about this issue is great to me. There is humor that is lacking in anything Batman touches. More importantly, it’s Bruce that is funny! Damien and Dick are usually used for comic relief in Batman books, but this time Bruce made me laugh out loud multiple times. It’s a refreshing change of pace. Along with the humor theme, Batcow makes his return, and just seeing it cracked me up. It’s so ridiculous, yet so distinctly comics that it’s beyond awesome.

Beyond the funny, this book brings Batman the detective back. It is also great. So many of the New 52’s Batman books have overlooked that aspect, but it’s back in issue #3 if not for a fleeting moment. He is investigating Leviathan, and trying to see just what it is Talia is up to. What he has yet to figure out is just how entrenched in Gotham they are. This series is shaping up to be pretty crazy, and I can’t wait for the next installment.

Chris Burnham’s art wasn’t something that drew me to the book initially, but damned if it isn’t everything I could have asked for. From the first time we see Matches, to the last pages it is fantastic. The spark of the match that illuminates a Batman shaped glare on his glasses had me giddy. Then we see Burnham tackle ridiculously creepy scenes in the final pages. I may not have been a fan of Chris Burnham coming in to Batman Incorporated, but I sure am now!

Batman Incorporated #3 is a return to driving Leviathan’s story forward, and it is a fun ride. Things aren’t looking good for our hero in disguise, but that’s not really new for Bruce. This is definitely something you should be reading. Buy it!