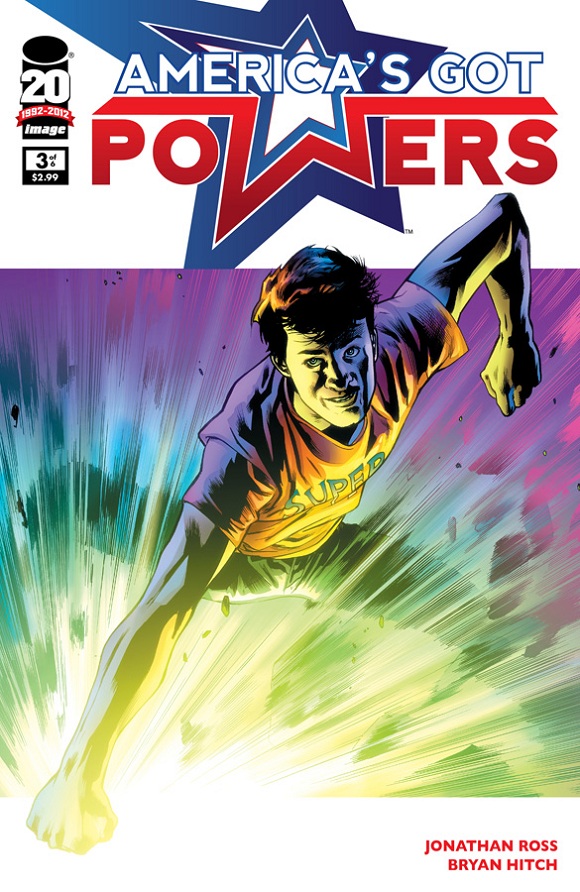 This book is Magneto’s worst nightmare come true. America’s Got Powers has been on a bit of a hiatus lately, but issue #3 comes back fairly strong. There’s a joke there…You have to read it first. Anyway, Tommy is set to take part in the TV show that is America’s Got Powers, and we get some more details about the shady organization that runs it. Everything is handled really well in this book. All the characters come off as genuine, and all the relationships seem truly developed. We are given some “in the locker room” moments in today’s book, and they give some reasoning as to why these kids take part in their game. Also, there are some new characters introduced, and they are looking to add some big wrinkles to the landscape as we know it.

We are still left with lingering questions, but the story is driving along nonetheless. We get some pretty humorous scenes here as well. And that’s a welcome addition to such a disturbing book. Don’t get me wrong, this isn’t Grim Leaper or anything like that, but it has some parts that can make you recite amendments of the Constitution. I’m fairly certain that nothing they are doing to those kids is kosher.

Brian Hitch is doing a great job bringing this book to life. This is an action driven book so far, and the art carries that well. But in the unsavory moments is just described he is able to inject the unbridled fear that is needed to make it seem realistic. It’s really moving to see, and leaves you feeling a little dirty. There are times where things get a little wonky, but it’s minor and few and far between.

I’m enjoying America’s Got Powers s so far, but there are still a ton of questions still out there to be answered. It may be for that reason that I enjoy it so much. I like being left in the dark only to have a bomb of a reveal dropped on me (frequent readers of my reviews will know there is a joke there as well).