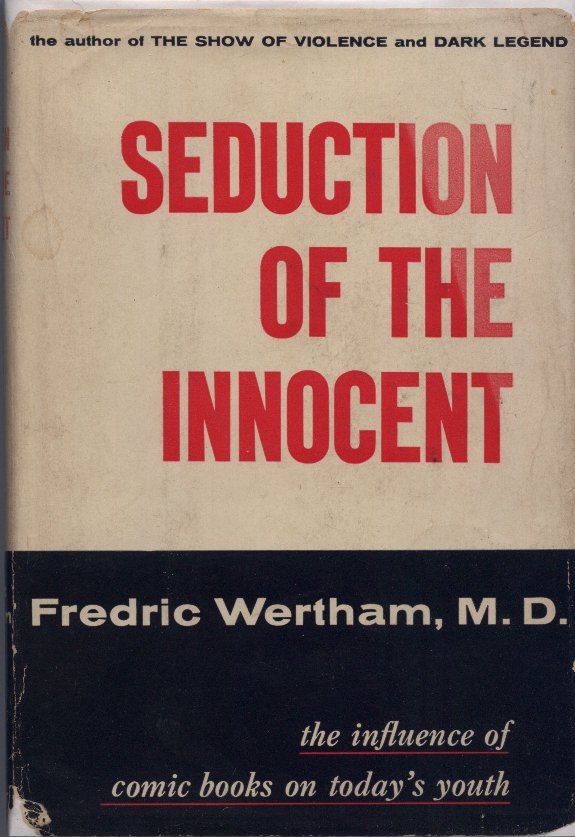 “All that is necessary for the triumph of evil is that good men do nothing.”

I do not wish this to become a political screed, and by that I mean the now de rigueur Left/Right caterwauling that stifles true conversation, but in the wake of the tragic Aurora, Colorado theatre shootings, there arose from the usual quarters a hue-and-cry over violence in the media, with comics particularly singled out. I’m sure that to most of you, this criticism of our chosen hobby smacks of political opportunism of the most craven sort, and will pass as inconsequential gamesmanship during a Presidential election season, but many years ago, this debate arose and nearly destroyed comics as an industry, bankrupting many publishers and forcing others to abandon their most creative properties, with the repercussions being felt even today.

In 1950-51, during a segment devoted to Juvenile Delinquency of Senator Estes Kefauver’s Special Committee to Investigate Crime in Interstate Commerce, comic books and their publishers found themselves on trial for all manner of social ills, in much the same way violent movies and video games are today. They were granted a reprieve, in part due to this testimony from Louis Goldstein, Chairman of the Kings County (NY) Board of Judges: “I never came across a single case where the delinquent or criminal act would be attributed to the reading of comic books”, as well as similar words from J. Edgar Hoover, head of the F.B.I. This respite would be brief, sadly.

Fires had already been lit in the public’s consciousness, and connections made between comics and violence, however, and by the 1954 publication of Dr. Fredric Wertham’s “Seduction of the Innocent: The Influence of Comic Books on Today’s Youth” and it’s subsequent excerpting in the influential magazine, Ladies Home Journal, the furor had arisen to a fever pitch, with public burnings of comic books by church and civic groups, as well as enacted legislation banning comics entirely in many municipalities…and this in a country where we had just helped make “the world safe for Democracy”.

As stage-setting for this debacle, during World War II, comic books were routinely distributed to G.I.s in their care packages, and these returning soldiers and sailors acquired the comics-reading habit. This new audience was served by the industry with books designed for a more adult readership; titles such as “Crime Does Not Pay” and “Gangbusters”, the re-imagining of characters such as the Phantom Lady for older readers, and of course the introduction of true “horror comics”, the ultimate expression of this trend being William M. Gaines E.C. line; “Tales from the Crypt”, “The Vault of Horror”, “Shock Suspenstories”, et al.

These types of comics, though intended for adults, were still “kiddie books” in the minds of many people, who still associated the medium with Bugs Bunny and Mickey Mouse, and who were appalled by the level of violence, some of it quite graphic, that to them was being distributed to impressionable youngsters. So when a noted psychiatrist ascribes all the ills of juvenile delinquency and child violence to horror and crime comics (this latter appellation including virtually all the extant super-heroes), the general public sat up and paid attention.

In an effort to stave off government censorship, the “Comics Code Authority” was established in 1954 to allow publishers to self-regulate their industry, by sending the books, pre-publication, to an independent board for approval. Grounds for dis-approval included victorious or un-punished criminals, excessive violence, sexuality, sensuality, horror, the depiction of criminal acts in detail, vampires, werewolves, the un-dead…you get the picture, I’m sure. The Code would eventually be revised, after the more-human Silver Age Marvel characters began to hold sway, and particularly in the wake of the U.S. Government’s backing of the 1971 Spider-Man “drug issues” (#96-98), and the same year’s Green Lantern/Green Arrow (#85-86) on a similar theme.

In the years since, and certainly over the last 20 years following the “Image Revolution” and the rise of smaller publishers, there has been an increase in violence and sexuality in comic books, mostly in books aimed at adults, but as the average age of readers has increased, those aspects of characterization have crept into mainstream, formerly “all-ages” books, as well. Before we go on, let me state for full disclosure that I grew up in “The Sixties”, proudly call myself a capital “L” Liberal,  and consider myself wholly on the side of free expression, providing that it’s responsible.

Remembering that the U.S. Congress, and then the courts, recently spent millions of our tax dollars investigating Roger Clemens and his alleged use of steroids, is it a reach that some over-ambitious public official seizes on an illusionary comics violence/real-world violence link, and starts the witch-hunts anew, and with the imbalance of adult to all-age appropriate books in a product still associated in most minds to children, I believe it’s whistling past the graveyard to think we won’t hear a Senator intone, much as one did to Bill Gaines: “Well, Mr. DiDio, do you find that Catwoman cover in good taste?”

For the on-going health of this industry, we as consumers, thinking adults and parents must demand, either through our voices, or by voting with our wallets, a return to balance in this medium. If we continue to support the books that re-inforce the mostly incorrect, but widely-held notion of this industry and it’s fans as a monolithic “Repressed Boys’ Club” that sadly reflects the coarseness of today’s society, rather than celebrate true heroism; an industry with far too much product that demeans and insults half it’s potential audience, and that, despite the good-will generated by billion-dollar films, manages to marginalize itself into a fringe marketplace with an over-priced product, the comic book industry will find itself under a similar cloud of public scrutiny as 60 years ago, and in it’s present weakened state, may never recover.

We must craft a return to civility, so that there are books for everyone; children and adults, women and men, and yes, even “repressed fan-boys”, before history repeats itself with something akin to the Hollywood Production Code of the 1930s, or a new Doctor Wertham imposing his will upon this medium we cherish, transforming it into something so safe as to be as saccharine as they were in the Eisenhower 50s, as opposed to the vibrant art form we want comic books to strive to become. As comics fans, we need to speak out, and broker our own solution, before someone does it for us and takes away our choice.

“First they came for the Communists, and I didn’t speak out because I wasn’t a Communist.

Then they came for the Jews, and I didn’t speak out because I wasn’t a Jew.

Then they came for me, and there was no one left to speak out for me.”

“Seduction of the Innocent”

“Seal of Approval:  The History of the Comics Code:

“The Ten-cent Plague: The Great Comic Book Scare and How it Changed America”