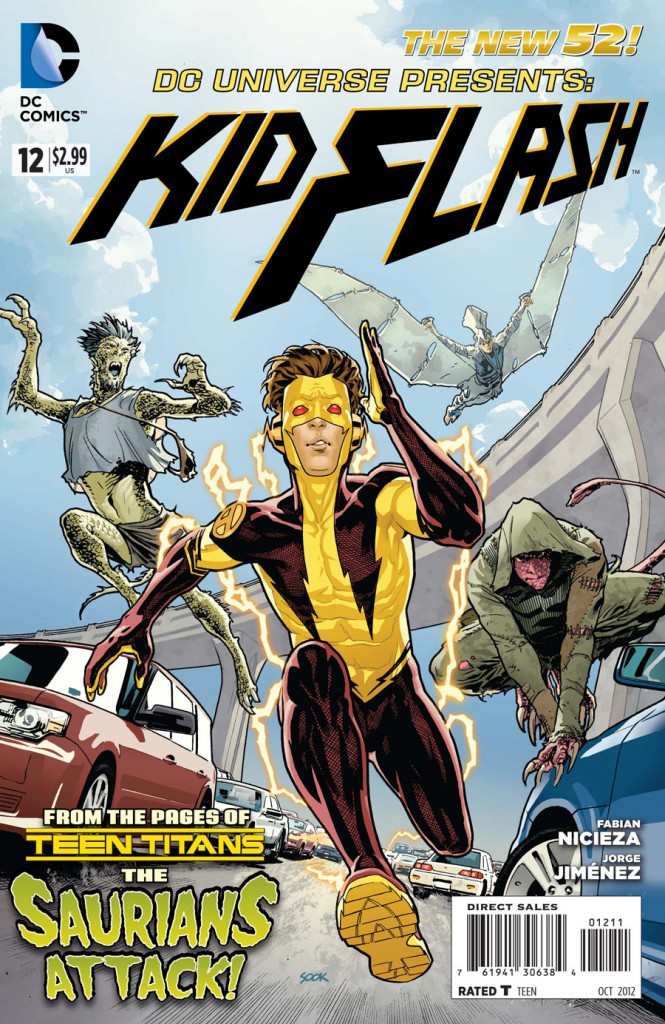 The mission of the DC Universe Presents was to give B and C list characters like Deadman, Challengers of the Unknown  and Vandal Savage, who didn’t have their books, a chance to be featured for a small run. Up until now each of these has been a self contained story spanning 3-5 issues, so imagine my delight when I saw the next character getting his own mini run would be Bart Allen himself, Kid Flash. I would have thought, based on past DC Universe Presents, that this would be a refreshing step away from his involvment in the Teen Titans and offer up a nice little flash (yep I went there) of the Impulse we used to know. Well I thought half right, because while this silly tale of half dinosaur teenagers rampaging through New York City is a blast, its one and done nature clashes completely with this anthology series’ ethos and turns into nothing more than a “read Teen Titans” commercial.

The book begins with a recap page and I don’t care if DC does want us to think it’s part of the story, the fact is, it’s Bart talking to the reader and filling him or her in on all the events of the last few story arcs in Teen Titans. There is nothing inherently wrong with this type of continuity dump, but for a series that is supposed to be baggage free, it certainly feels a little odd. This one page of strangeness would have been forgiven though if the proceeding narrative was one that reached beyond a single 22 page story outing, but alas it does not. In fact, the only reason I can imagine this issue exists in the first place, is to pull in a few fans of the character who have abandoned Lobdell’s team up book. Well, in that case, mission accomplished, because my love of Bart Allen did drive me to pick up this book, but I’m not even close to venturing into the world of Teen Titans.  If anything this stunt has driven me further away from it.

The baggage around this whole thing is actually a shame, because what is contained with in its pages is really solid and entertaining storytelling. Fabian Nicieza does a fine job of penning an all-ages book that is broad enough for a child, but just subtle enough for an adult. Is this Animal Man, Swamp Thing or Batman, no, but if this Kid Flash book was a mini series or even an ongoing one, I’d heartily recommend it to anyone looking for a fun read. Bart Allen is a genuinely funny character who exudes the kind of crazy energy that any hyper active teen would give off except he also has super speed! He cracks jokes, makes mistakes and best of all, he doesn’t really take himself seriously. I even really enjoyed the three dino kids that have made their way into our world.  They are the kind of subversive and pulpy characters that so often get tossed aside in the dark comic book world and I hope they get a nice arc sometime soon. I mean the one guy has a spray that turns people into dinosaurs!

So far so good right? Fun, well written and I didn’t even mention how I dug Jorge Jimenez’s way of depicting Kid Flash’s speed, and so you may be asking yourself, “what exactly is the problem?” Well, dear reader it comes on the very last page of the book, first we are treated to red letter blazed across a panel that read, “Flash fact: It’s the end of the issue, but not the end of the story!” and then Bart looks out at us and says, “If you’re a masochist, check out Teen Titans #12 in one week for more on Teryx’s quest!” Correct me if I’m wrong, but didn’t I plunk down $2.99 for a book called DC Universe Presents? Shouldn’t I be at least treated to a resolution of the story that was started here? Well, apparently not, and even worse is that they don’t tell you is that the conclusion of the story in Teen Titans #12 isn’t even the full issue, it’s a backup. So, it seems we are forced to pay $6 dollars for a comic and a third based solely on our hunger for a under used character. I don’t know about you, but that is not something I’m interested in doing.

Skip It – I wish I could recommend DC Universe Presents #12: Kid Flash, I really do. Fabian Nicieza’s story is a lot of fun and if it was complete, I would tell you to rush out and buy it immediately. The fatal flaw here is that it’s not.  Instead, DC wants you to buy this and another issue of a different book in order to complete Bart Allen’s story and I can’t support that kind of dishonest marketing with an endorsement of this comic. If DC wants to give Mr. Nicieza and Jorge Jimenez a shot on a standalone Kid Flash book, I will be be there with bells on, but until then skip this.