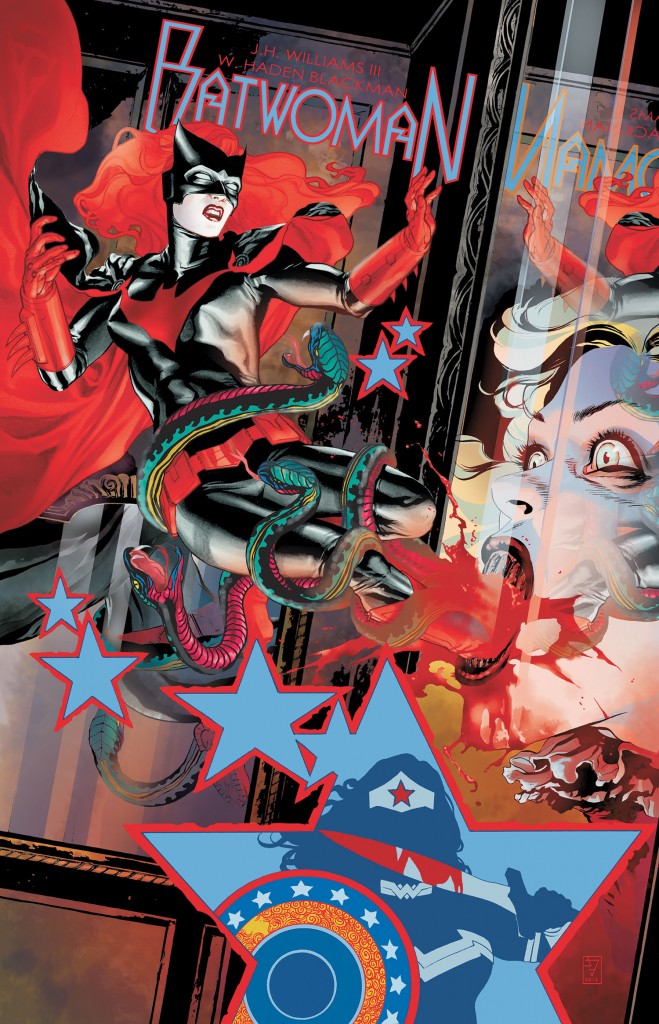 Words are hard for me to form about this issue. Mostly, all I want to do is gush about the sheer amazingness of what I just read. Honestly, I haven’t been this excited about a single issue since Bryan Q Miller’s run on Batgirl, #17.

Let’s take this step-by-step. The artwork is the most obvious awesome part of this issue. Williams outdoes himself with this issue. We are already familiar with how he distinguishes between Kate’s civilian life and Batwoman life, but the difference between the panels with Wonder Woman and Batwoman really highlight Williams’s ability to adapt to a character and make them his own. I love Cliff Chiang’s artwork in the main Wonder Woman title, and Williams provides an equally strong interpretation of the Amazon. The contrast of these two styles on the same two-page spreads is remarkable.

In short, I have goosebumps just looking at this issue.

Moving right along, this issue has Batwoman AND Wonder Woman. This team up is going to be fierce, and I love how Blackman and Williams are building up the anticipation for this dynamic duo by giving us inner dialogue of both characters before they meet. Seems like a simple thing to do, but it really fleshes out Diana and her role in this book. As she is fighting massive monsters, her thought process and self-awareness reflect the soldier within her. She and Kate have a lot more in common than I originally thought, and these women will fall with each other nicely. Both fight for justice and protection of the weak, no matter what the personal cost is.

Batwoman and Wonder Woman aren’t the only ladies I’m pumped to see in this comic book. Bloody Mary’s dark past is looked at, and she becomes even more frightening than when I was a child (NEVER going into a dark bathroom again). The way Williams and Blackman weave the backstory into the search for the villain is beautiful. Second, Bette is back! Still shaky about her near-death experience, she is aching to jump back into the fight. She reminds Uncle Jake of the promise to train her intensely. Man, I love a woman who gets back up and doesn’t give up!

Buy. Duh. An issue this fantastic doesn’t come around every week. The best part is that you don’t have to know too much about what’s going on to jump in on this issue. We recently got out of a pretty big conflict, so there are sections of internal dialogue going on that help bring the reader up to speed. At worst, some inferences will need to be made, but nothing that makes the story confusing. An issue like this makes the months and months I waited for the series worth it.