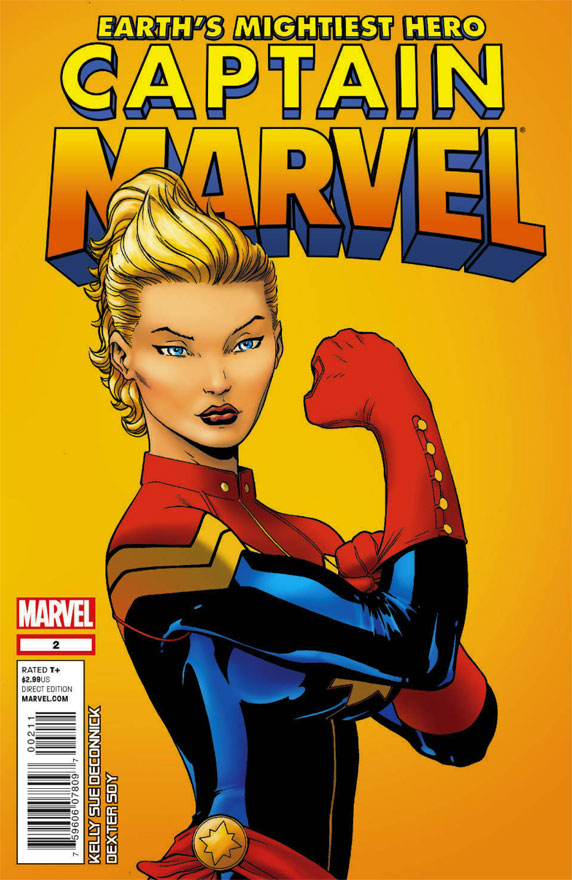 Nothing is ever good enough for Carol Danvers. Some people eek their way through life simply remaining a part of the crowd. They’d rather go unnoticed than make a big splash, because splashes draw attention. Carol would most likely slap those people in the face and then order them to drop and give her twenty. She is a Captain after all.  There’s something about the tone and language of Kelly Sue Deconnick‘s Captain Marvel that I am simply in love with. There is this sassy ease to Carol’s words and actions that demands my attention and respect. It’s something I haven’t felt from a lead female character in quite some time.

Captain Marvel #2 find our bullheaded heroine looking to break the flight record of her idol in the skies, Helen Cobb, by flying 37,000 feet in Helen’s old T6. But simply proving that the record can be achieved just isn’t good enough for Carol Danvers. She’s got to honor Helen … by punching that record hard in the face! Only the T6 has other plans for Carol. And upon needing to make an emergency landing Capatin Marvel is going to find out that things have taken a turn for the weird. If only she could remember the protocol. Damn.

I made a mess of myself twice while reading this comic. And by that I mean that I adored a panel so much that in my head we’d already gotten marries and had three kids. Dexter Soy handles the art of Captain Marvel #2 with precision and style. With what looks to me like ink and paint working together against deep black line work, there are panels that I would gladly hang in my living room for all to see. You might think that maybe I’m painting it on a little thick, but have you seen this book yet? You haven’t? Well then, best get to the comic shop and pony up that cash.

You see, the thing about writing a review for a book as solid as Captain Marvel #2 is that eventually, after so much praise, people are going to start to think that you’re full of it. I assure you, I’m not. There really isn’t any one thing that I don’t like about this book. In my opinion Carol should serve as a wake up call to quite a number of female characters in comics that need to get their act together. You don’t need walk around with your breasts bounding to-and-fro, you don’t have to sleep with your heroes to prove a point, and you certainly can be whip-smart and have the allure to back it up. Kelly Sue  is really on to something here and I am so ready to see this incarnation of Captain Marvel rewrite some history.

Did you read the review? Then you’re completely aware that this comic is a MUST BUY. Really, I’m not kidding. This is a comic that you want in your collection. Not only does it feature a tremendously strong character through the stellar writing of Kelly Sue Deconnick, but Dexter Soy will most likely become a name you’re going to hear repeated many times inside your local comic shop for years to come. Pick up Captain Marvel today and help support solid comics in today’s market.

* This review was written while listening to Fiona Apple‘s album: The Idler Wheel Is Wiser Than the Driver of the Screw and Whipping Cords Will Serve You More Than Ropes Will Ever Do