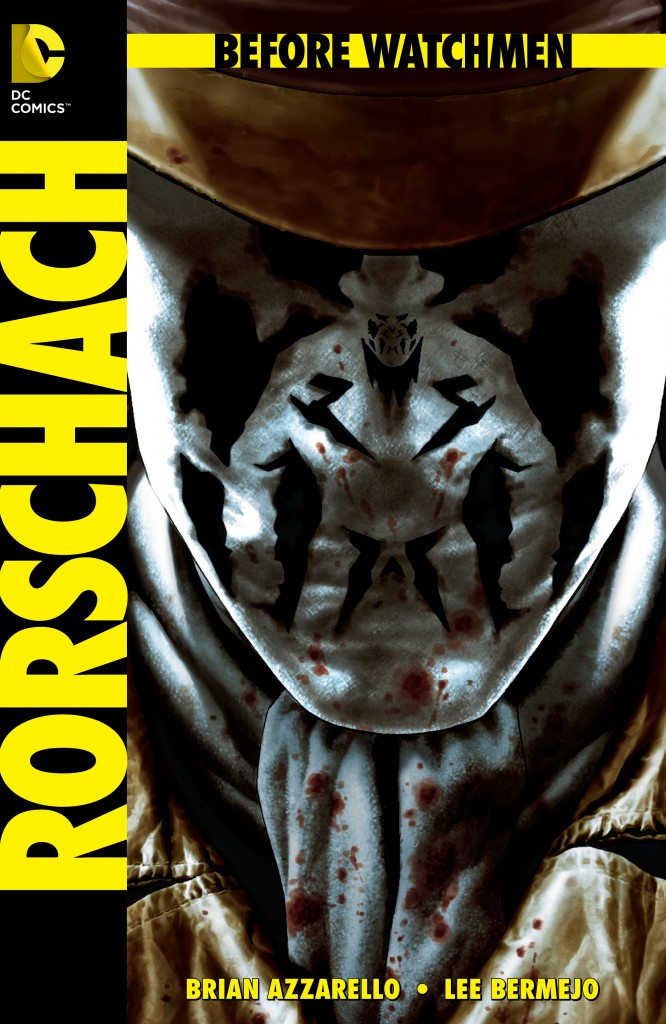 “Rorschach’s Journal October 12th, 1985: Dog carcass in alley this morning, tire tread on burst stomach. This city is afraid of me. I have seen its true face. The streets are extended gutters and the gutters are full of blood and when the drains finally scab over all the vermin will drown. The accumulated filth of all their sex and murder will foam up about their waists and all the whores and politicians will look up and shout “save us!”…and I’ll look down and whisper “no.”

The day has finally come, the moment that I was both dreading and anticipating when they announced Before Watchmen, yes, Rorschach #1  is here.  When Alan Moore and Dave Gibbons first breathed the character into existence back in 1986 they created one of the most memorable personalities, not just in comics, but in literature as a whole. Now, over 25 years later it’s Brian Azzarello and Lee Bermejo turn to step up to the plate, and while Bermejo’s art is beautiful and Azzarello manages to put together a serviceable vigilante story, this issue never feels like more than a pale imitation of the previous incarnation.

Mr. Azzarello is a great writer, but his attempts to recapture the harsh, dark, Earnest Hemingway in Hell type prose of those original Rorschach’s Journals never lands the way it should. The first entry is full of odd wording, badly phrased metaphors and lacks a vibrant verbosity. It’s understandable if the writer wanted to depict a less psychotic, less wordy, Kovacs in order to give him a character arc throughout the years, but these entries are no less harsh, they are just not as well written. Then there are the, seemingly, intentional grammar and spelling mistakes, it’s easy to see the feeling of authenticity that Azzarello was going for here, but these gaffs only serves to stilt the progression of the narrative.

The biggest slight against Before Watchmen: Rorschach #1 is that it takes the character into disappointingly familiar territory.  One of the most electrifying things about Rorschach is that he is Batman without the conscience, but here he is relegated to some simple, albeit sometimes violent, detective work. Where is the commentary about compromise, repressed sexuality, and morality? Without those things he is just another person in a mask who beats people up, and we have plenty of those.

To give an example of my problems with the story I will point a moment where our hero travels down into the sewers to find a drug stash, only to encounter a large, scarred crime boss who says to him, “Crime fighter, right? That’s what you are? Well it’s nice to meet’choo…I’m crime.” Maybe I’m nitpicking, but the character deserves better than an adversary who says something like that. Now, to be fair, Azzarello is also setting up Rorschach to come into conflict with a serial killer called “The Bard” who inscribes quotes into his victim’s flesh. This thread has some good potential and it’s only that, and my faith in Mr. Azzarello’s writing, that has me leaning towards purchasing issue two.

While the prose here may not be outstanding the art by Lee Bermejo surely is. He packs such an extraordinary amount of detail into each panel that it makes New York City and the people who inhabit it become alive. This is Manhattan as Rorschach sees it, a damp, dank, disgusting sink hole that has dirt on every surface and in every crack and crevice. Bermejo’s art makes each thundering punch and resulting bruise a reality and it almost manages to save this book from its mediocrity.

This book is okay, but not great and when it comes to this character I demand something special. I can go on about the standard crime story, but it really all comes down to the fact that this doesn’t feel like Rorschach. I will give it up for Lee Bermejo’s beautiful art but that’s not enough to recommend something that carries the name Rorschach. I’m as big a fan of the character as you can get, but even I’m waffling on picking up Before Watchmen: Rorschach next issue. So, for now I’d say skip it.